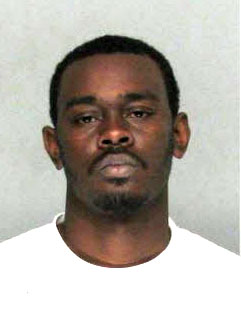 Where is Reginald Forrest?

Forrest (pictured) is one of three suspects accused in last week’s drive-by shootings that injured two Augusta men on Brown Street and left them with injuries to the buttocks and feet.

Authorities have arrested suspects 21-year-old Fredrick Nelson and 26-year-old Carl Nipper and charged them each with two counts of aggravated assault and possession of a firearm during the commission of a crime.

The victims, a 39-year-old man and 30-year-old man, told authorities they were on the porch at 1454 Brown Street at 8:30 p.m. last Wednesday when three men drove up in a vehicle and shot at them. The older victim suffered a gunshot wound to the buttocks and the younger man was shot in the right foot and left hip. Both were treated at GRU Hospital.

Forrest is shown here in a previous mugshot, but authorities say he may now have short twists in his hair.

Anyone with information on Forrest’s whereabouts is asked to contact the Sheriff’s Office at 706-821-1080 or during business hours at 706-821-1020.  Callers may remain anonymous.