The Aiken County Coroner’s Office will be holding their Pauper Burial Services next Thursday, Sept. 16 at 10 a.m. at the Graniteville Cemetery on Gregg Highway in Graniteville.

Family and friends of the deceased who could be found were notified of the service.

The Aiken County community is invited to attend the graveside services. The Coroner’s Office has made every effort to contact their families and extended family members, the press release says.

Napier Funeral Home of Graniteville donated 11 urns, and Graniteville Cemetery Association has provided the tent, chairs and their services.

“Due to the current pandemic and out of respect for others, the Aiken County Coroner’s Office has asked that masks be worn and social distancing be practiced,” the press release said.

From a press release: “The Coroner’s Office would like to also thank Hatcher and Shellhouse-Rivers Funeral Homes for their services, New Future Granite II preparing the headstones, TJ Farrer on Track, LLC for digging the graves and the Aiken County Sheriff’s Office Pipes and Drums.” 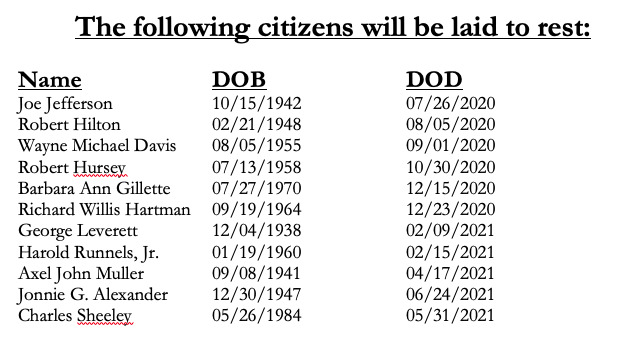