2 Dead in Shootout in Augusta; Drug-Related 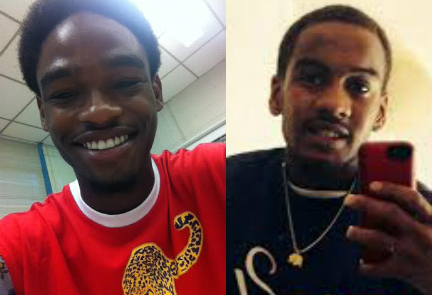 (ARREST INFO BELOW) Two people are dead after a triple shooting in Augusta on Monday night and persons of interest are in custody, authorities said.

Jerald Carter Jr., 17, of Augusta (left picture), and  Ian Roberts, 21, of Augusta, were both shot to death Monday night.

According to authorities, deputies were called at 8:15 p.m. Monday to Ethan Way at Mathews Court in reference to a shooting. Three victims were shot. One person was injured and two died from the shootings, Roberts dying on the scene and Carter dying at GRU hospital.

“The original incident was related to the second incident. Persons of interests are being held at this time,” sheriff’s Sgt. Monica Belser said in a press release.

Both victims died from at least one gunshot wound, Coroner Mark Bowen said in a press release. Autopsies are scheduled for Thursday at the GBI Lab in Atlanta.

WRDW-TV is reporting that deputies don’t believe the public is in danger and these incidents are isolated.

UPDATE WITH ARREST INFO:
Press release from the sheriff’s office:

On November 10, 2014 at approximately 8:13 p.m.., the Richmond County Sheriff’s Office received a call to Ethan Way at Matthew Court in reference to shots fired and a subject being struck. While en route to that call, responding Deputies were flagged down on Isaac Lane, in reference to a second subject being shot. During this time, the Sheriff’s Office also received a call to the 3600 Blk. of Jonathan Circle in reference to a third person being shot.  Upon further investigation, it was learned that all three subjects were shot at the Ethan Way and Matthew Court location.

The investigation revealed that (2) groups met at Ethan Way at Matthew Court for the purpose of completing a drug transaction when an altercation ensued and shots were fired.