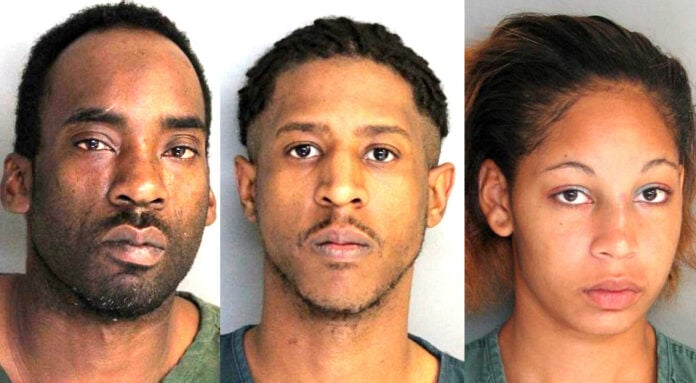 Aiken police have arrested two men and are seeking a woman following a shooting at a Greenville Street home where drugs were discovered, authorities said.

Darryl Snow, left, has been charged in the attempted murder of 26-year-old Christopher Johnson (middle). Johnson was later arrested because marijuana, crack cocaine, and guns were found in his home. And police are looking for Jennifer Oakman (right) on drug charges since she lived at the home, police said.

Police say Snow went to the home Wednesday afternoon and shot Johnson, but Snow was shot by an unknown suspect while fleeing the home. Snow isn’t cooperating. (Yes, it’s complicated.)

Both men were treated at local hospitals for their gunshot wounds and later taken to the Aiken County Jail on multiple charges.

Know where Oakman is? Please call Crimestoppers at 1-888-CRIME-SC.  You can remain anonymous and may be eligible for a cash reward of up to $1,000.