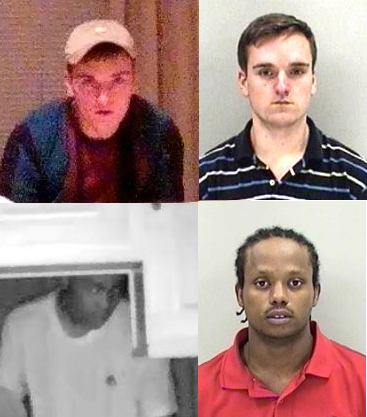 Frank Allen Wilkins II, 19, (top photo) and Gregory Washington, 24 (bottom), have each been booked into the Richmond County Jail on charges of burglary in the first-degree of a residential property.

The victim told authorities that her home was broken into at 4:55 a.m. Wednesday, triggering an alarm and feeding the video cameras used for her home surveillance.

The thieves apparently realized they were on video, with one looking right into the camera. One of the white males covered up a security camera and a second camera, in the bedroom, was unplugged and taken.

But not before the homeowner was able to get the images and show them to law enforcement on her cell phone.

Turns out the woman’s home was ransacked and wires to the alarm were cut.  The burglars stole several guns, jewelry, a large TV and an iPad, authorities said.

Authorities sent out the woman’s images to local media. Wilkins was later shown in a picture wearing the same shirt as one of the burglars.

Wilkins and Washington are being held without bond at the jail.