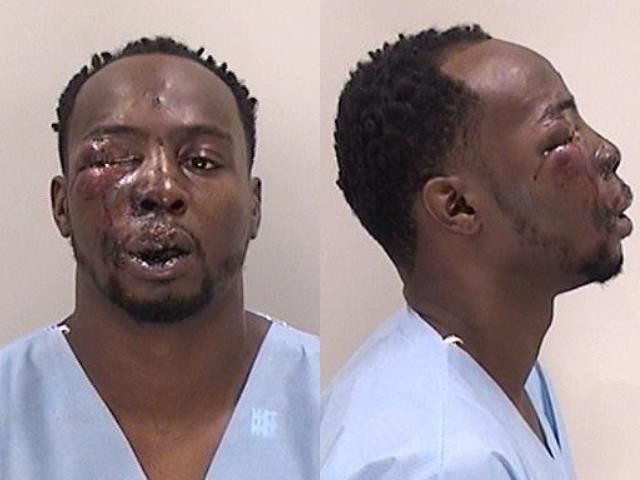 An Augusta drug dealer was seriously injured after running from cops and getting tased, leading him to hit the concrete face-first in a bloody fall.

“I’m only taking care of my family by selling weed,” suspect Christopher Hunter told cops from his hospital bed on Tuesday.

Narcotics officers found 400 grams of marijuana, $20,000 in cash and a gun during a raid at an apartment at 4012 Wheeler Woods Road. A report says Hunter lived there with a woman and children.

Hunter was put in plastic handcuffs next to a car after the raid, but he broke out of them, punched an investigator and ran, according to a sheriff’s report. The investigator chased Hunter and then shot his Taser at the suspect’s back, causing him to fall onto the concrete surface, a report says.

“(Hunter) continued to resist being apprehended until other investigators arrived and assisted him placing him in a pair of regular handcuffs,” the report says. “During the struggle (the investigator) received lacerations on both arms, a swollen cheek and broke his gold bracelet valued at $250.”

The drug suspect received a number of lacerations on his face and body from the impact of hitting the ground. He was taken to University Hospital for treatment, but an EMS first responder said the suspect spit blood and saliva in his face during the ambulance ride, according to a sheriff’s report.

After his release from the hospital Wednesday, Hunter was taken to jail and charged with felony obstruction of an officer, possession of marijuana with intent to distribute and weapon possession. According to the jail website, he is currently free on bond.