Augusta Lung Employee Accused of Embezzling $500,000 & Giving Her Own Relative a Raise, Too!

The long-time payroll manager at Augusta Lung Associates was arrested Tuesday for embezzling hundreds of thousands of dollars, according to a sheriff’s report.

The suspect’s scheme was likely uncovered when she went on medical leave in November. The new payroll manager was hired in February, and the theft was reported April 6.

Important note: The embezzlement story in the paper should have said that a relative of TAYLOR also works there and was given unauthorized hourly wage increases from her proper pay of $14 an hour to $18 an hour, according to a sheriff’s report.

The full story is in this week’s edition of The Jail Report. Issues are sold in stores or online to read on your phone or computer by going to thejailreport.com. 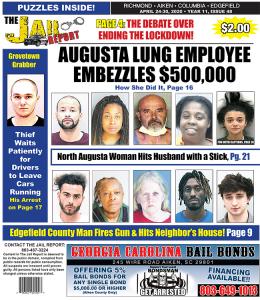