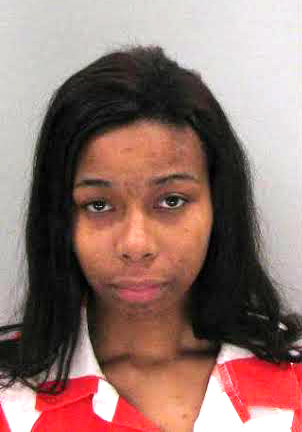 Remember the Augusta Mall girl whose fight was caught on video last year? That was 18-year-old Keoshamine Nero.

A judge went easy on the hair-pulling princess, giving her probation and fines for the high-profile incident.

She won’t get off that easy this time.

Authorities say the teenager set up a friend last week for a violent armed robbery at his home designed to steal the victim’s guns. Four others have also been charged, including a few involved in that Kroger fight that led to murder Thursday.

The victim in the home invasion, a 22-year-old man, told authorities that Nero came over to his apartment on Wrightsboro Road last Wednesday night and was hanging out in his bedroom. Fifteen minutes after she arrived, four armed robbers suddenly walked into his bedroom. Nero fell to the floor, and one of the robbers pointed a gun at the victim and said, “Where all dem guns at?”

The victim said he didn’t know, and the robber picked him up and threw him to the floor in his closet.

“The male then stood over (the victim) while pointing the gun at his face. (The victim) pushed the gun upwards with his right hand, and it discharged one time. Then, the males and Ms. Nero left the residence in an unknown direction of travel.”

The victim told investigators that Nero saw his firearms while visiting the night before. During her visit Wednesday night, he noticed she was acting strange.

“He stated that while they were in the bedroom, Ms. Nero went to the kitchen to get water several times. (The victim) believes she unlocked his front door during one of those trips,” a sheriff’s report says.

Deputies observed one bullet hole in the closet above the water heater. The projectile went through the wall, the bathroom walls, and out into the hallway where the round was found near the steps.

Nero has been charged with armed robbery, burglary, aggravated assault, possession of a firearm during the commission of a crime.

Some of those involved in the home invasion were later charged with affray in the Kroger fight Thursday night that led to the murder of 18-year-old Montravius McNair.