Augusta Man is Shot in the Face on Sunday Morning

An Augusta man is recovering after being shot in the face Sunday, authorities said.

Devin Cullars, 22, turned up at the hospital with a gunshot wound. He told responding officers that he was at a stop sign in front of Aggie’s Enterprises when he was shot in the early morning hours of Sunday, between 4-6 a.m., a sheriff’s report says.

After the shooting, Cullars said he drove his girlfriend’s white Mercedes to a friend’s house on Deans Bridge Road. Once he was there, that friend then drove him to Augusta University Medical Center. Deputies looked for a crime scene in the area where the victim reported the gunfire, but they could not find one, the report says.

Medical staff told officers that Cullars was shot on the right side of his neck and exited out the left jaw.

Several people are wishing Cullars a speedy recovery on social media, including Frank Harewood, who said, “SON I LOVE YOU AND I AM PRAYING FOR YOU! LORD KNOWS I HOPE YOU PULL THROUGH!! ITS SOMETHING ELSE TO WAKE UP TO THIS.”

Tyrell Bennett said, “They tried to take you from us but that wasn’t Gods plan. We love you and know you’ll shake back soon. Praying for you. See you soon lil cuz.”

Here is the sheriff’s report: 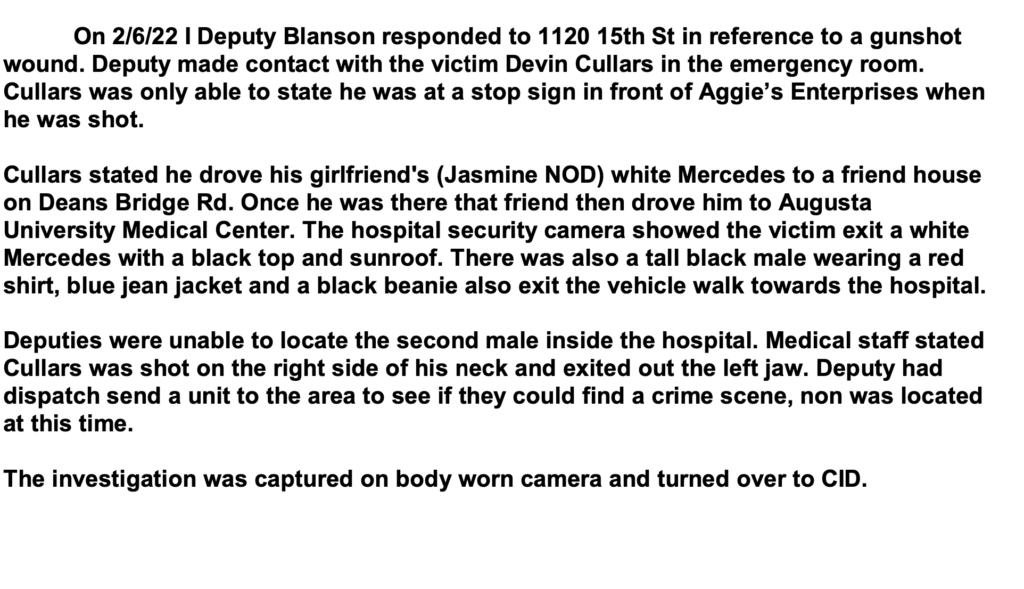