An Augusta man accidentally killed his best friend Saturday morning while they were playing with guns in the back yard, authorities said. 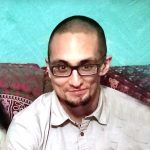 The tragic shooting led to charges of involuntary manslaughter and weapon possession against 29-year-old Spencer Warren in the shooting death of 34-year-old Richard Splichal (pictured at right).

The two men – both military reservists and gun enthusiasts – were in the victim’s shed on Metcalf Street on Saturday morning. Here’s what a sheriff’s report says happened:

Warren ran into the residence and told the victim’s wife that her husband had been shot. Paramedics arrived and rushed the victim to Augusta University Medical Center, where he died.

Warren was reportedly very distraught from the killing since the two were best friends and he thought he had emptied the gun of ammunition.