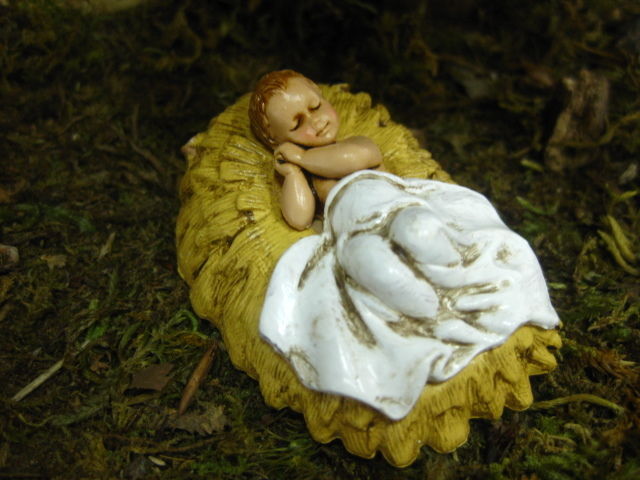 Baby Jesus was stolen from an Evans home over the last few days, according to a sheriff’s report.

(For more local crime news, pick up this week’s Christmas edition of The Jail Report, in stores now.)

A 60-year-old Evans man said someone stole the nativity scene piece on Sunday from his front yard on Windmill Lane. A day or two later, thieves also came and took a white wooden reindeer from the same home.

The Evans man told a responding deputy that he would prosecute if the thief was found. (Note: The picture above is NOT the baby Jesus that was stolen; it is an illustration.)

Common theft. According to Wikipedia, Baby Jesus theft is the theft of plastic or ceramic figurines of the infant Jesus from outdoor public and private nativity displays during the Christmas season. The prevalence of such thefts has caused the owners of outdoor manger scenes to protect their property with GPS devices, surveillance cameras, or by other means.

One Indiana man who suffered the loss of his Baby Jesus figurine rebuffed suggestions to secure the figurines on his porch because, “that would be like putting Jesus in jail.”

While Baby Jesus thefts are largely regarded as pranks, they are set apart by the involvement of a religious icon. “They think it’s a prank, but it isn’t a prank to some of these people,” Pennsylvania state police Corporal Paul Romanic told a reporter in regards to an incident in which 10 nativity scene figures were found in a yard after being stolen from across Bucks County, Pennsylvania. “Plus, it’s just wrong to steal the baby Jesus.”

Historian Daniel Silliman has argued that, whatever the thieves’ intention, the act puts the culture of Christmas in a different light. “Baby Jesus thieves literally take the Christ out of Christmas,” Silliman writes.