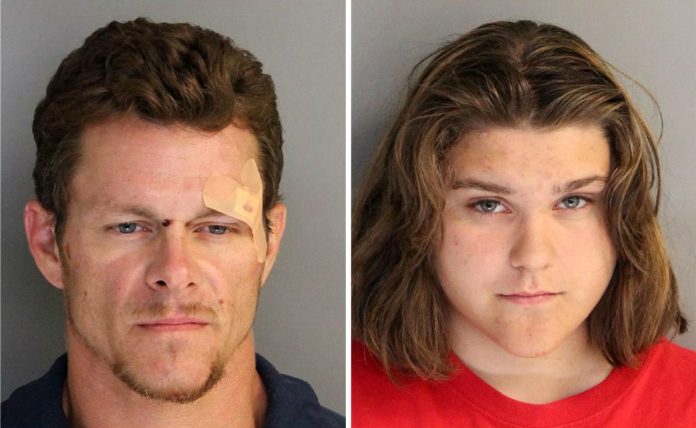 A Burnettown officer was injured Thursday while tackling a suspect who tried to escape custody in an Aiken County courtroom, authorities said.

Christopher Salas, 35, was tackled inside a Burnettown court and taken into custody. A judge had just sentenced the registered sex offender to jail time for staying in the Langley Pond Park after sunset with a 17-year-old girl. Now Salas faces more serious charges of escape and resisting arrest.

Burnettown Police Chief David Smith said the officer will be OK, but he was injured during the scuffle.

“They tackled him, and the tackle went through three rows of chairs,” the chief said. “When they hit the floor, the officer ended up on the bottom.”

Salas(left) and 17-year-old Destiny Ferguson (right), both of Warrenville, were caught at the park after sunset, and both were arrested. In court Thursday, the girl’s mother testified before sentencing that the family is trying to keep Destiny away from the older man, but she sees Salas as a boyfriend. Salas is a sex offender, convicted in 2006 of attempted or lewd act on a child.

On Thursday, a judge heard the testimony and sentenced both Salas and Destiny to 30 days in the county jail and a $55 fine. That is reportedly when Salas tried to run out of the courtroom.

Chief Smith said his agency has been cracking down on people who go into the park when it is closed.

“We are experiencing a lot of vandalism,” he said. “All of our parks close at sunset. If we catch anybody in there, then we charge them, especially if they have been warned before.”