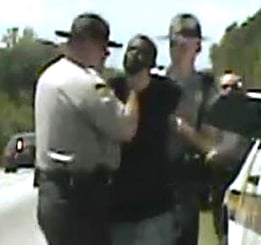 A former Aiken County Sheriff’s deputy was fired last year for using excessive force on a DUI suspect, but the officer was never criminally charged and continues to work locally as an officer in Burnettown.

Solicitor Strom Thurmond Jr. reviewed the video and the complete investigative file from the State Law Enforcement Division, and he declined to prosecute.

“We would have had to have a good faith belief that a crime was committed. And in this case that threshhold was not met,” Thurmond told The Jail Report on Tuesday, citing the lack of credibility of the witnesses who were both intoxicated at the time.

Still, Thurmond said he did not like Warchol’s actions.

“I didn’t like how either one of these people were treated by Deputy Warchol.  I didn’t care for his tone. I didn’t care for how he handled himself in how he dealt with these two individuals, both of who were highly intoxicated and were charged with numerous offenses and ultimately pleaded guilty to multiple offenses,” the solicitor said.

On June 1, 2013, Deputy Warchol along with other officers responded to a disturbance on U.S. HIghway 1 in the Langley area. The disturbance involved a domestic dispute between Damont Jessie and Sherese Taylor while they were drunk driving and carrying children (ages 6 and 7) in the car. The domestic occurred while Jessie was driving a vehicle and resulted in a minor traffic accident.

Both Jessie and Taylor became combative and uncooperative during their arrest which resulted in Deputy Warchol using force during the arrest. Dash-cam video shows Deputy Warchol twice punching Jessie as the handcuffed suspect resists and tries to pull away. The officer also put a choke hold on the man and dared him to “Do it again! Do it again!”

A S.C. Highway Patrol officer standing near Deputy Warchol said he feared for his life when Jessie resisted. “He says Mr. Jessie lunged at him, and he was fearful he was going to be head-butted,” Thurmond said.

Another video shows Deputy Warchol punching Taylor while she is squirming in the back seat of a patrol car with handcuffs on. At one point, another officer Tazed her while she resisted arrest.

Deputy Warchol gave his own account while writing the incident report. During the DUI test, the deputy said the suspect became irate and said “F*** this. Take my f***ing ass to jail.”

From Warchol’s report: “I placed him in handcuffs and advised him of his rights and of his DUI advisement rights. Mr. Jessie became even more irate and started yelling and cussing. He then lunged at Trooper Gardner in a very aggressive manner, trying to strike him in his face using his head. I reacted in an attempt to stop him by striking him in his face with a closed fist. I struck him in his bottom lip/jaw area, causing a small laceration to his bottom lip.”

Deputy Warchol said the suspect was checked by EMS and offered a trip to the hospital, which he refused.

Shortly after Deputy Warchol’s report was written, a supervisor determined no violations had occurred and Deputy Warchol used the “necessary” level of force. That determination was later overturned by other sheriff’s office supervisors after they reviewed the video.

An internal review into the amount of force used was conducted on July 24, 2013, and Deputy Warchol was fired the same day for “violation of policy 103 Code of Conduct/Excessive Force,” according to sheriff’s Capt. Eric Abdullah.

From Capt. Bobby Wilson’s summary: “While in the escort position, the subject displayed defensive resistance (pulling/pushing away to defeat the escort position). It is not an attack on the officer, but a physical act designed to prevent the officer from gaining control, attempting to pull away from Deputy Warchol. Deputy Warchol immediately struck the subject in the face twice with what appeared to be a closed fist and placed his hand around the throat of the subject in a choke maneuver taunting him to ‘do it again.’ This is a clear violation of ACSO policy and an ‘excessive use of force.'”

In an interview with officers, Jessie said he believed Deputy Warchol was too aggressive. He said he thought the officer should be fired and he be compensated.

On Nov. 21, 2013, Thurmond declined charges and wrote a harshly-worded letter condemning the officer to SLED and calling his actions “troublesome.”

“I find that his conduct on June 1, 2013, fell far below any acceptable standards of what society expects from a law enforcement officer,” Thurmond said in the letter.

Burnettown Police Chief David Smith hired Warchol as an officer around March 2014. On Tuesday, Chief Smith said he stood behind his decision and said he did it after careful review of the video.

“I will be honest with you. There should not have been any charges placed against Officer Warchol. If I believed there should have been charges, I would have never hired him,” he said.

Chief Smith said he believes there may be some controversy as to what happened in the video, but in the end, he supports his decision, especially considering Thurmond reviewed the case and chose not to file charges.

The chief said he was amazed that Warchol’s original supervisor said there was no excessive force but his decision was overturned.

“It went through his supervisor, his supervisor’s supervisor and a training review, and then somebody says, ‘Hey, I have an issue with it.’ Then they change their opinion about what happened,” Chief Smith said.

Chief Smith said Officer Warchol would not want to comment on the case.

(STORY BY GREG RICKABAUGH, PUBLISHER OF THE JAIL REPORT)

WHY REPORT THIS STORY NOW?

The Jail Report and WRDW-TV both received tips recently that SLED had investigated Warchol, who now works for the Burnettown Police Department. We asked SLED for their file on the investigation and after several weeks, we got the file Monday (Dec. 1).

This case is one of many not publicized by the Aiken County Sheriff’s Office. This year, we also broke the story of the officer who left a police K-9 in a hot patrol car last year, leading to the animal’s death. In that case, Sheriff Michael Hunt defended the case as a personnel matter that he didn’t feel needed to be publicized.