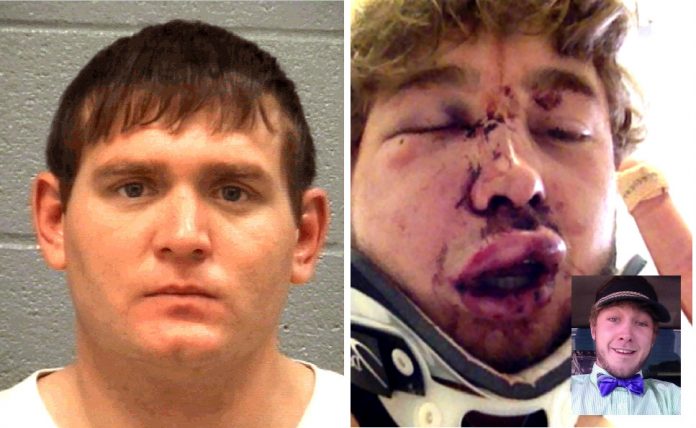 A Memorial Day attack at Riverside Park in Evans left an Augusta man with broken cheek bones and a broken nose, and his friends are saying his attacker got off with a light charge and only a few hours in jail.

Columbia County authorities originally charged 29-year-old Ryan Meagher (left) with battery in connection with the violent attack on 22-year-old Jeff Colten Godsey (pictured at right before and after the attack).

Sheriff’s Capt. Steve Morris said the case was reviewed and Meagher was re-arrested Wednesday night for aggravated battery. Bond was set at $25,100.

Meagher, of Augusta, told The Jail Report earlier Wednesday that he regrets the assault. But he argues that he was defending his little brother from Godsey and his friends, who he claims assaulted his little brother at a recent party. Meagher said his brother was not seriously injured in the party assault but the same group threatened to harm his brother again on Monday night at the park’s volleyball court.

“I really do feel bad about it (the Riverside assault). There is nothing I can do about it now,” he said. “I really shouldn’t have been there at all.”

According to the victim and witnesses, Meagher came to the park about 10:30 p.m. Monday, pushed Godsey down on the sand and starting beating on him, continuing even after the victim was knocked unconscious.

A Facebook post by friends of Godsey complains that Meagher only spent a few hours in jail and got off light.

“What is wrong with Columbia County?” said Patti Cornette. “Both cheek bones broke and a nose broke and the attacker gets out of jail in two hours?”

Jail records show he spent about three and a half hours in jail before his release on $2,600 bond. It was not immediately clear whether he would make bond on the upgraded charge after his second arrest.