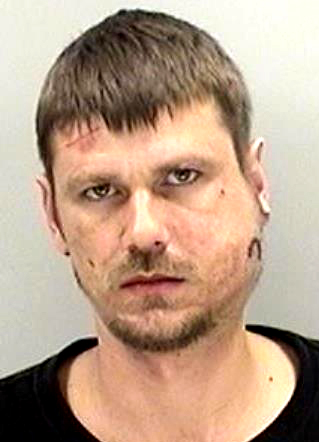 An Augusta man nearly struck two deputies with his car Thursday night while fleeing a DUI checkpoint. He led officers on a chase that ended when he crashed his car into an Augusta home, where he fled on foot before being captured.

Keene Burroughs, 32, of Keys Lane, Augusta, was treated for his injuries at a local hospital and then charged with aggravated assault on a police officer, weapon possession, DUI, driving without a license, leaving scene of accident, reckless driving, fleeing or attempting to elude.

According to a sheriff’s report, the suspect pulled up to a checkpoint at Richmond Hill Road and Bungalow Road about 8:15 p.m. in a 2000 Pontiac Grand Prix. Officers suspected he was drunk and asked him to pull over to the side of the road.

“Burroughs accelerated his vehicle toward Dep. (Steven) Jones and Sgt. John Gray,” a sheriff’s report says. “Dep. Jones had no escape route, thus forcing Dep. Jones to throw his flashlight through the driver’s window striking Burroughs on the left side of the face, causing the vehicle to steer away from (the officers).”

During a chase with another officer, Burroughs tossed out a brown bag with a loaded 12-gauge shotgun in it. He then crashes into a home at 2253 Overlook Road, a report says. He ran from the vehicle but was found behind 2259 Overlook Road.

He told deputies the reason he threw out the shotgun was because “he was scared,” a report says.

Burroughs was taken to GRU Hospital for treatment and later taken to the jail.