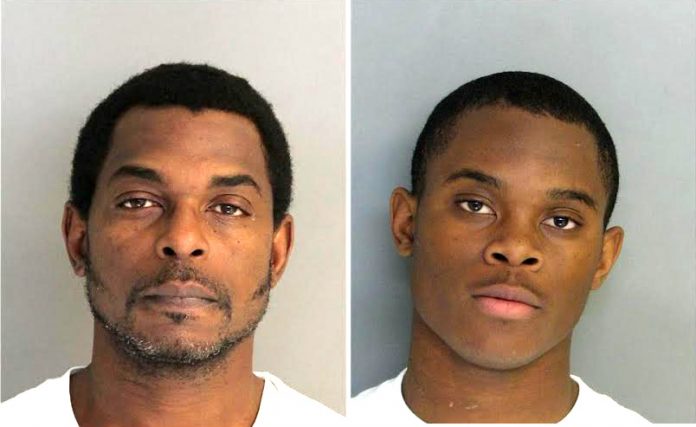 Aiken Public Safety is requesting the communities’ assistance in locating a father and son who fled officers.

Ernest Simpkins, 44 (left) and Jalen Simpkins, 21, both of Graniteville, are being sought. Ernest Simpkins is wanted for Harassment, Reckless Driving, and Failure to Stop for Blue Lights and Siren. Mr. Simpkins is also wanted by Aiken County Sheriff’s Office for Violation of an Order of Protection.

Jalen Simpkins is wanted for Obstruction of Justice and Resisting Arrest with Bodily Injury.

A short time later, the vehicle was observed exiting the city limits and travelling on Jefferson Davis Highway. Aiken officers attempted to stop the vehicle, and the vehicle continued into Graniteville. Once in Graniteville the driver stopped the vehicle and fled the traffic stop on foot.

After a short time the suspect’s son, Jalen Simpkins, arrived at the scene of the traffic stop indicating he was the driver of the vehicle, and then he fled on foot. The officer involved knew Jalen Simpkins was attempting to draw the attention of perimeter officers to aid in the further escape of his father.

Jalen Simpkins was being placed under arrest for obstruction of justice when he began to resist those efforts. During the resistance he pushed an officer to the ground causing the officer to suffer injuries. He then fled the area on foot.

Anyone with information related to the whereabouts of these individuals is asked to contact Crimestoppers of the Midlands at 888-CRIME-SC (888-274-6372). Callers will remain anonymous and could be eligible for a cash reward of up to $1,000.