A Hephzibah man beat his 8-year-old daughter with a belt as punishment for disrupting school, leaving the child with bruises on her hip, buttocks and thigh, authorities said.

J.B. Lindsey Jr., 50, of Hephzibah, was arrested Friday for cruelty to children in the first degree.

The girl’s mother brought her to Eisenhower Army Medical Center on Friday to see a psychologist for her behavioral issues. A doctor found the bruises while examining the victim and called the sheriff’s office and DFACS.

The girl’s mother Lindsey told authorities that the child has been getting in trouble at school, forcing them to pick her up everyday. Last Tuesday, the victim’s father picked the girl up at school and whooped her with a belt multiple times, a report says.

For more crime news pick up up the latest edition of The Jail Report, sold in local convenience stores for $1.75. 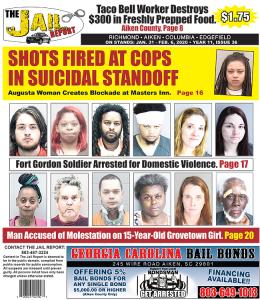