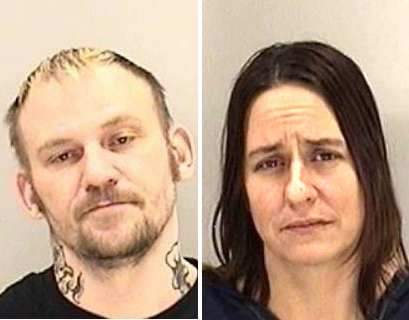 A Hephzibah couple was arrested Sunday after their 11-year-old daughter was found living in a messy home where the temperature was 54 degrees.

Michael Crawford, 33, left, and Tracy Crawford, 38, were both charged with deprivation of a minor. The girl has been removed from the home.

According to a sheriff’s report, the girl returned to her home Sunday afternoon on Lake Michigan Drive after a weekend with the grandmother. But she soon called her grandmother back in hysterics since she couldn’t get her mother and stepfather to come out of their locked bedroom. So the grandmother called the cops.

Deputies found Mrs. Crawford under the influence of something, which she claimed was  prescription drugs. Mr. Crawford was simply passed out.

Even worse, the deputy found a home that was dilapidated, unsanitary and with no working heat. The temperature inside was 54 degrees.

According to a sheriff’s report, there were several piles of dog feces throughout the residence, and the home had an overall smell of animal urine. The girl’s bed sheets were extremely dirty and looked as if they had not been washed in months.

“The food that was in the refrigerator was expired and several items had mold growing,” the sheriff’s report says.

The daughter told deputies she did not want to stay at the home. She told the officer about disturbing incidents involving her stepfather, including one where “he had picked her up by her shirt and threw her.”

As it turns out, the girl’s 15-year-old sister told deputies she no longer lived at the home because of the poor living conditions. Officers contacted the Department of Children and Family Services, who turned the younger girl over to her grandmother.

The Crawfords remain in jail under $3,500 bond each.