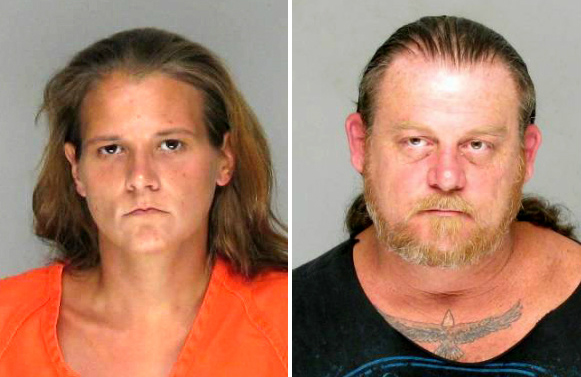 The life-threatening shooting of 51-year-old Steven Ouzts (right) by 29-year-old Amanda Neeley (left) comes almost a year after Ouzts injured the woman in a violent domestic incident at the Hephzibah home they shared for over a decade. The couple have two children together.

On Wednesday, authorities were called to Ouzts’ home on Forest Road where Ouzts had been shot, sheriff’s Sgt. Shane McDaniel Sr. said in a press release. Investigators discovered Neeley had shot her fiance in the upper torso.

The victim was rushed to Georgia Regents University Hospital, where he was listed in critical condition, Sgt. McDaniel said.

Neeley was charged with aggravated assault and possession of a firearm during the commission of a crime under the Family Violence Act.

On July 4, 2012, Ouzts was arrested for simple battery on Neeley and later pleaded guilty to pushing her down inside the Hephzibah home they shared. She suffered scratches to her chest in that incident. A judge sentenced him to a year of probation and ordered him to attend Family Violence Intervention.

According to authorities, Ouzts no longer lived with Neeley when Wednesday’s shooting occurred.

Neeley remains in jail under no bond.