In North Augusta, Elderly Man Answers Knock to Find 3 Robbers on His Porch

Three youth have been charged with a week-old home invasion on an elderly North Augusta man whose only mistake was answering his door.

From a North Augusta press release:

On Wednesday night, February 1, 2017 shortly before 11 pm, three unidentified black males forcibly entered the home of 81-year old Robert Dooley in Lynhurst subdivision.  Once inside, the suspects held Dooley at gunpoint and stole various pieces of property (TVs, laptop, jewelry and cash) before they fled the scene in an unknown vehicle.  Mr. Dooley was physically unharmed during the altercation.

Shortly thereafter, an officer responding to the call, found a suspicious vehicle in close proximity to the Dooley home abandoned with several pieces of electronics in and around the car that were quickly confirmed to belong to the victim, Robert Dooley.  Public Safety seized the vehicle and secured it for further processing at Headquarters.

Early the following morning, the owner of the car came to Public Safety Headquarters to report his car stolen.  Detectives with Public Safety already having information to the contrary, were able to get the owner to implicate two potential suspects who had borrowed his car the night before.  After a series of interrogations, it was determined that the car owner and the other two conspired in unison to break into the Dooley home and rob him. 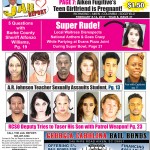 Public Safety’s investigation led to the positive identification of the three males that committed the crimes. All have been arrested and are currently incarcerated at the Aiken County Detention Center.