A Martinez man is accused of purposely burning his wife with a curling iron after an argument, according to a sheriff’s report.

Conner Reed Hamby, 37, was charged March 10 with battery – family violence, the second domestic violence charge against him in three years on the same victim. And yet, he is free on bond.

The pending charge for domestic violence from 2020 in Beaufort County was part of the reason for the recent fight. Hamby’s 2020 arrest led to a protection order that prevents him from having any contact with her middle child, something they were arguing about, the report says.

“As the argument continued, Amber stated Connor went into a rage and forced her from the bed, in their bedroom, to the floor near their bathroom door,” the report says. “Connor then retrieved a hot curling iron from the bathroom counter, which was still on from Amber using it early in the day, and pressed it against her bare left arm, causing her to receive a burn.”

Hamby fled after she told him she was calling 911.

Officers tracked down Hamby to his father’s house and showed him photos of Amber’s injuries, but he didn’t seem to show much emotion, the report says.

“Looks bad, but I didn’t do it,” he replied, according to the report.

In his notes, a deputy said “it would not have been likely that Amber could have caused a self-inflicted wound by the position, size, and severity of the burn on her arm.  The angle in which the burn was received was that of someone holding it and pressing it on her skin for some time.  Amber told officers that the curling iron gets to 400 degrees when it is on.

Beaufort County Charge: Hamby has been violent before, according to authorities. While in Hilton Head in July 2020, the suspect allegedly choked the victim until she lost consciousness. 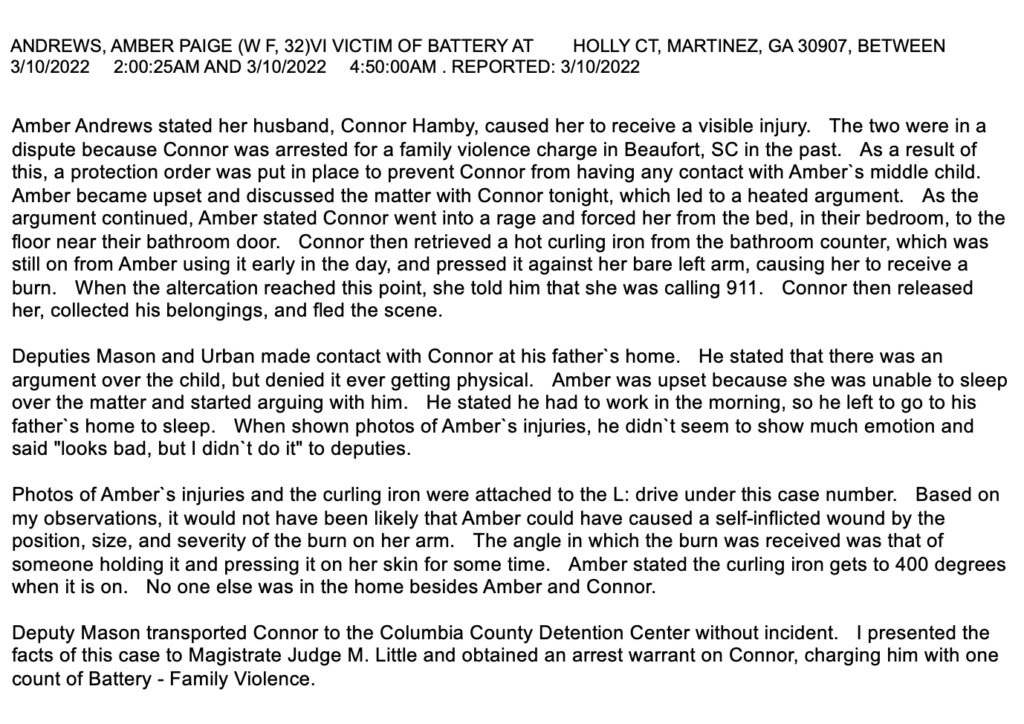