Family of Chandler B. Smith of Graniteville are mourning him on social media before they have even found his body.

While Aiken County authorities are quiet on the missing man and any investigation, cousin Jessica Sheppard updating his friends and family Sunday night on Facebook. She said that Smith died on Oct. 22, 2020, the day he went missing after his release from the Aiken County Jail for a marijuana charge.

“Chandler still has not been located, but SLED has sufficient evidence that Chandler has been murdered. Technically, his status would be ‘missing, presumed deceased,'” Sheppard posted on Sunday night. “SLED has issued a load of warrants in connection with the case, three of which are murder warrants.”

The Jail Report has not been able to confirm that. Coroner Darryl Ables of Aiken County said he has no information on a death by that name. The Aiken County Sheriff’s Office is not commenting. A SLED spokesman has not yet replied to our message seeking information on his agency’s involvement.

Here is what we know: Smith, 23, went missing in Aiken back in October and his family believe he was kidnapped as soon as he was released from the detention center. The family told WJBF-TV last year that investigators with Aiken County Sheriff’s Office have a video that shows their son being forced into a red car with three men. (Story continues below) 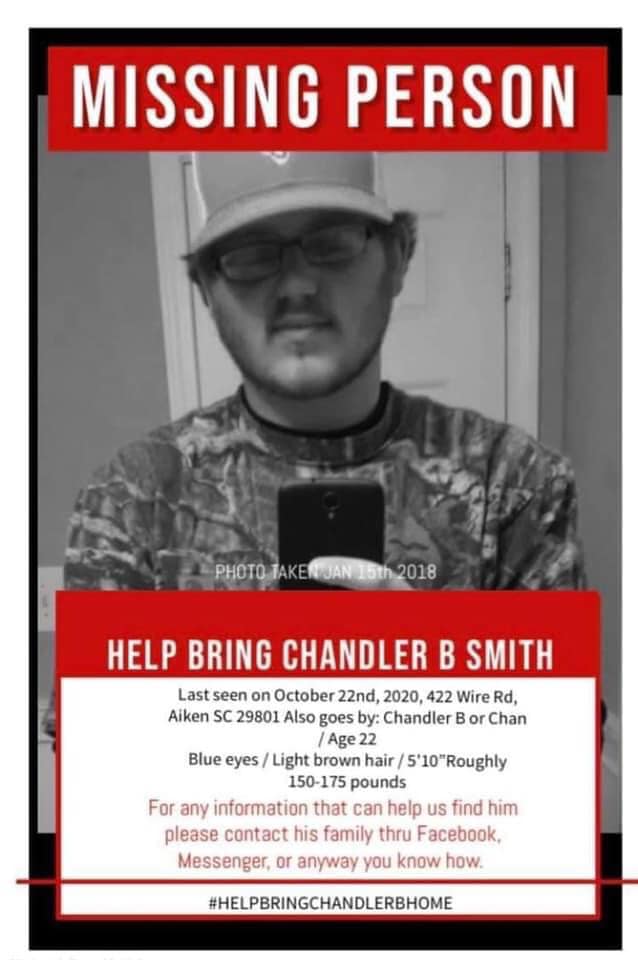 Once that car left the jail parking lot on Wire Road, the family never saw Chandler again. Relatives have canvassed parts of Aiken County near Wire Road and beyond.

Relatives say they believe Aiken County investigators already have two suspects in custody. They believe a third suspect has fled the country.

Meanwhile, friends and family are mourning him online and sharing the latest updates on Facebook.

Rose Tullis posted this message overnight as a response to Jessica Sheppard: “We will bring Chandler home don’t you doubt that. … We will let Aiken Co do their job, search [or] whatever, but when they say they’re through and if he’s not home, we will search and won’t stop till he’s where he belongs. All of you are a part of our family and we don’t leave no one behind sweetie.”