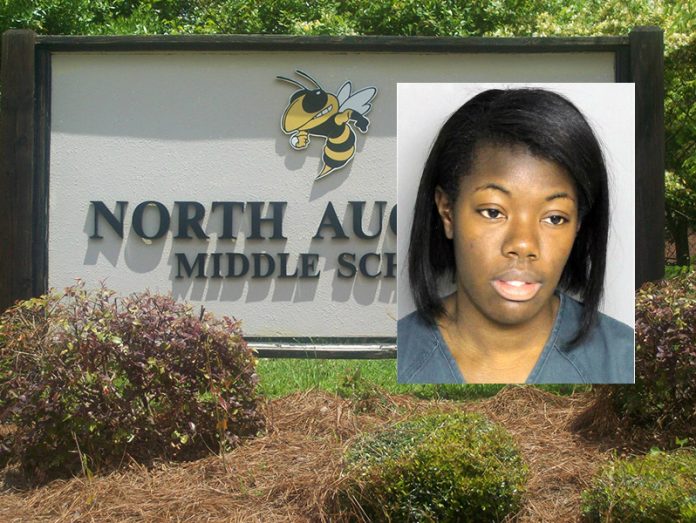 A 2-year-old girl is expected to make a full recovery after her mother left her in her vehicle all day Friday while she taught math at North Augusta Middle School, authorities said.

Teacher Raquel Stevens told authorities that she forgot about her daughter until she finished work at 5:35 p.m. and returned to her vehicle in the school parking lot – more than 10 hours later!

“She realized what happened and immediately sought medical attention by driving directly to the hospital,” a North Augusta Public Safety report says. “She stated the child was unresponsive, so she decided to stop at the RCSO Station at 401 Walton Way (in Augusta).”

People outside the sheriff’s office came to her vehicle and called for medical assistance. Paramedics rushed the girl to Augusta University Medical Center, where she was found to be unresponsive with an elevated body temperature.

The child’s diagnosis was described this way by police Lt. Tim Thornton: “Awake, alert and acting normal.  The child will make a full recovery without any long-term detriment to her health.”

Lt. Thornton said he did not know how the accident happened or where the child was supposed to be.  A DSS worker was notified and responded to the hospital. Stevens has two other daughters and resides in North Augusta.

On Tuesday, the 30-year-old teacher was charged with unlawful conduct toward a child and booked into the Aiken County Jail at 7 in the morning. Stevens was released on a $10,000 bond after spending five hours in jail.

According to a teacher biography posted online for the public, Stevens teaches 6th grade math at the middle school.

School District Communications Director Merry Glenn Piccolino released this statement: “Ms. Stevens has been teaching mathematics at North Augusta Middle School for the last three years. She is outgoing, personable and a ‘favorite teacher’ of many students. We can only imagine the anguish that’s associated with an accident of this nature and we join Ms. Stevens and her family in gratitude that the condition of her child is improving. Standard protocols have been employed pending the outcome of the investigation.”

From the teacher’s online bio: “I am born and raised in Beech Island, SC.  I received my degrees from SC State in Industrial Teachnology and Masters Arts in Teaching Elementary, and Educational Specialist from Augusta University in Curriculum and Instruction. This is my 6th year teaching. Before coming to North Augusta Middle School, I taught second and fifth grade at other schools within the CSRA. I have been married for 6 years (Patrick) with 3 daughters (Amari, Amirah, and Amiah). I enjoy shopping and spending time with family.”

For more crime news, pick up the latest edition of The Jail Report, sold in local gas stations. Here is the cover of the latest issue. 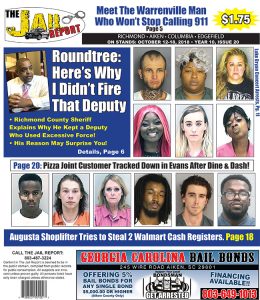