A Richmond County deputy has been fired after he confessed to sending sensitive information to WRDW-TV Channel 12, authorities said.

Deputy Marlon Campbell was fired for not being truthful during a lie-detector test and “conduct unbecoming a deputy.”

After being fired, Deputy Campbell said he “wanted to apologize for his actions,” according to an internal affairs document.

Read the sheriff’s press release here and the internal investigation below.

The statement from RCSO: “The Richmond County Sheriff’s Office Internal Affairs Division began an internal investigation after it was learned that several internal documents were disseminated to the public without authorization from this agency. Some of these documents contained sensitive information regarding pending investigations and criminal prosecutions and were not releasable under the Georgia Open Records Act. The information contained within reports, if disseminated improperly, may impair our ability to successfully prosecute cases.

“As a result of that investigation, Deputy Marlon Campbell has been terminated from the Richmond County Sheriff’s Office for violations of Richmond County Policy and Procedures, Conduct Unbecoming a Deputy and Employee to be Truthful.

Deputy Campbell has been employed with the Richmond County Sheriff’s Office since April of 2019. He had previously worked for our agency in the past. He was assigned to the Field Operations Division in the North Precinct.” 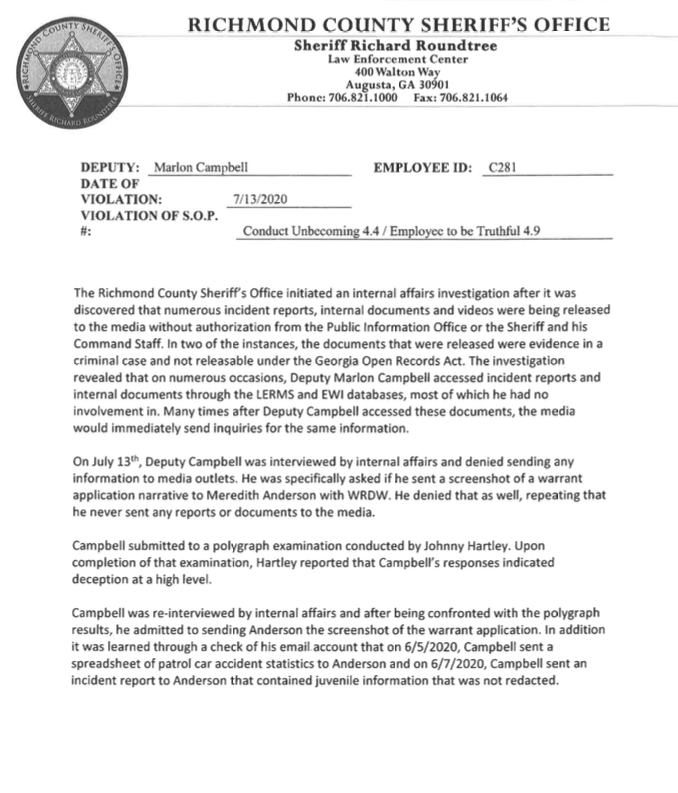