READ IT: Little Caesars & Suspect are Sued by Victim of Brutal Attack in Augusta Pizzeria 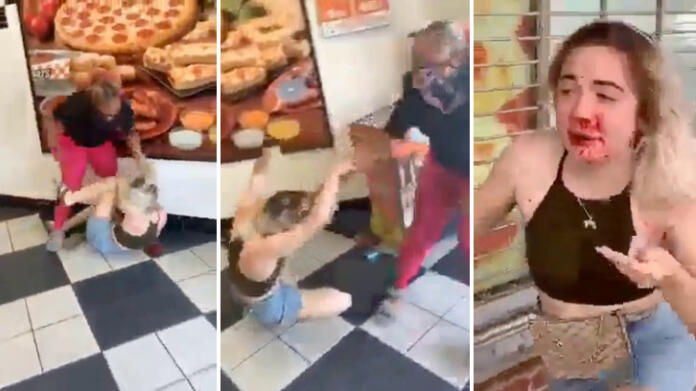 The Augusta woman who was brutally beaten at Little Caesars and was dragged in front of her child while employees watched has filed a lawsuit.

Emily Broadwater filed suit June 3 against the pizza company and Brittany Kennedy, the woman charged in the assault that was captured in a bloody video that went viral.

Filed by Attorney Joseph Neal Jr., the victim’s lawsuit seeks compensatory and punitive damages for aggravated assault, kidnapping, cruelty to a child and endangerment of a child on the premises of Little Caesars, which is owned by Quantam Restaurants, LLC. Kennedy is named as a second defendant.

The suit spells a damning case against the pizza company for failing to protect Broadwater against Kennedy, who had no business at the restaurant.

On May 17, Broadwater took her 2-year-old daughter D’Ani Jarman to Little Caesar’s pizza parlor dressed in a pink bow on Wrightsboro Road to get her a pizza to eat. She was told her pizza would be ready in 10 minutes and was invited to sit down in the lobby.

Kennedy then entered “for no legitimate purpose,” verbally threatened Broadwater and grabbed her by the hair, the suit says. She then pulled the Broadwater out of the chair before violently throwing her onto the floor.

The suit accuses two employees of watching the attack and doing nothing.

“At the same time, other patrons or loiters inside the restaurant begin to record video footage of [Kennedy’s] savage attack on [Broadwater] as she is screaming for help,” which employees failed to provide, the suit says.

“However, no such help comes for Emily Broadwater, the victim; despite her screams of terror, everyone inside Little Caesars, including First Defendant’s manager and employee(s), steps back and allows the brutal and savage attack bySecond Defendant on Plaintiff to continue, some watching and others filming this violent beatdown.

The suit accuses Little Caesars of gross negligence and conscious indifference. It also says they let the suspect escape, and Kennedy remained at large for over a week. Instead of apprehending the Kennedy, the suit says Little Caesars’ marketing team “went into overdrive to protect its public image and brand by releasing bald face lies to the public through national media outlets like Fox News stating ‘the safety of our customers is the most important thing to us.’” (Story continues below) 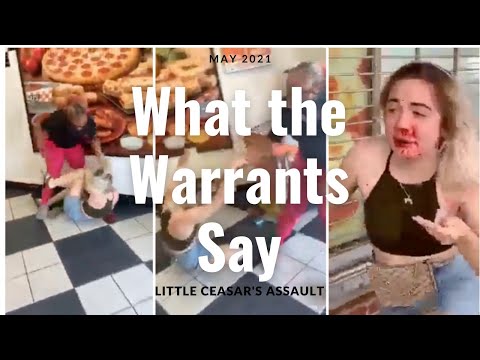 The suit says the pizza employees let the incident be recorded with the video receiving massive attention from the public, appearing on “dozens if not hundreds of media sites, newspapers, and television new shows across Georgia, the United States, and the world.” As a direct, Broadwater has been “contacted from people all over the world, some subjecting her to and expressing hateful and/or racist attitudes towards her because her minor daughter is a mixed-race child.”

Broadwater is seeking a jury trial and an award of damages, claiming Little Caesars is responsible for the negligence of its employees. It lists her injuries as: “A bloody and bruised nose, a large laceration on the inside of her lower lip which caused it to be severely swollen, a large knot on her forehead, multiple cuts on her head, face, and neck, a bruise under her chin, a swollen and black eye on the left side of her face, scrapes and cuts to both knees and her foot, a right hand contusion, a contusion to the top and back of her skull, the whole top of head was injured from being dragged by her hair from inside the restaurant to outside on the sidewalk, a bald spot on the right side of her head above ear from her hair being torn out by the savage Second Defendant, a sore and bruised left arm, soreness all over her body, anxiety when driving at night, and sleepless nights the entire week the Second Defendant was on the run, constantly fearing for her and her baby’s safety.”

The woman’s child has also suffered mental anguish from witnessing the attack and has nightmares as a result. “ (She) has awakened in the middle of night several times screaming for her mommy and talking about the big lady hurting her,” the suit says. “D’Ani sees Emily’s bruises and expresses worry and sadness that her mother is hurt.”

The suit was filed in the Superior Court of Richmond County.

Kennedy remains locked up in the county detention center without bond.