An Augusta man with pending charges for flashing people from his car was arrested again Sunday night for allegedly exposing himself to four employees of the Martinez Walmart. 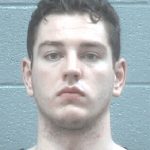 A 21-year-old Walmart associate said she was working in the pet section Sunday night when she was approached by Stephens.

“How are you?” Stephens said to her.

The woman turned her head and saw the suspect’s penis was exposed outside of his sweatpants, according to a sheriff’s report. Stephens then looked down at his penis and then made eye contact with her and “chuckled,” the report says.

The woman left the pet section and alerted co-workers, who glanced at the same man from a distance and noticed he was still exposing himself.

The employees called the sheriff’s office and Stephens was still in the store when deputies found him around 10 p.m. Sunday. He was then arrested but he bonded out quickly. Reached by phone Monday morning, he declined comment on the accusations.

Both of those charges are pending. Stephens is show here from a photo he posted to his Facebook page.

The suspect is hard to miss. He stands 6’5″ tall and weighs 215 pounds. He was also investigated for an incident from April 2017. In that case, a woman reported seeing a man pleasuring himself at a gas station on Fury’s Ferry Road. Investigators traced the vehicle to Stephen’s father, who said his son had been using the vehicle. The father defended his son by saying he had Tourette syndrome that caused involuntary and uncontrollable movements, authorities said.