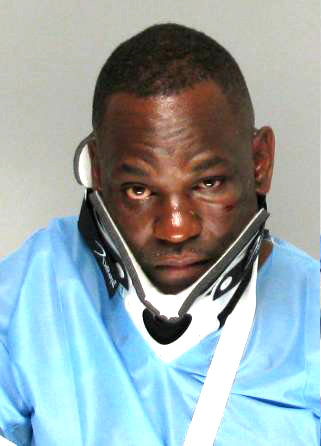 A sex offender from Augusta was arrested early Saturday after a car chase, a foot chase and after he punched and hit two Richmond County sheriff’s deputies.

Blair Keith Woods, 49, was charged with attempting to elude law enforcement, obstruction of a law enforcement officer, theft by deception, driving with as suspended license and running a red light, a Richmond County Sheriff’s report said.

Woods caught the attention of a deputy late Friday night when he ran a red light as he turned onto Gordon Highway off Tubman Home Road. The officer pulled him over on Gordon Highway and as the deputy got out of his car and walked over, Woods took off, driving behind the Southgate shopping center and then peeling off onto Willis Road, where he was driving 95 mph on a 25 mph stretch!

Another deputy joined the chase and Woods turned onto Cherry Road. That’s where the car chase ended when Woods lost control of his Infiniti, hitting a fence in front of a house on the 1900 block of Cherry Road. The car then hit a driveway and struck a power pole, the report said.

Woods managed to climb out of the driver’s seat and started running, jumping two fences, before the deputies managed to wrestle him to the ground. Woods still wasn’t going to make it easy, hitting both deputies a number of times, the report said.

Woods, of the 3500 block of Monte Carlo Drive, Augusta, is a registered sex offender, convicted in 2005 of aggravated assault with intent to rape. He was given a 4-year sentence with credit for time served. Woods was free in 2010 when he was arrested for failure to register as a sex offender, which earned him two more years in prison. In April 2013, he was charged with driving on a suspended license.