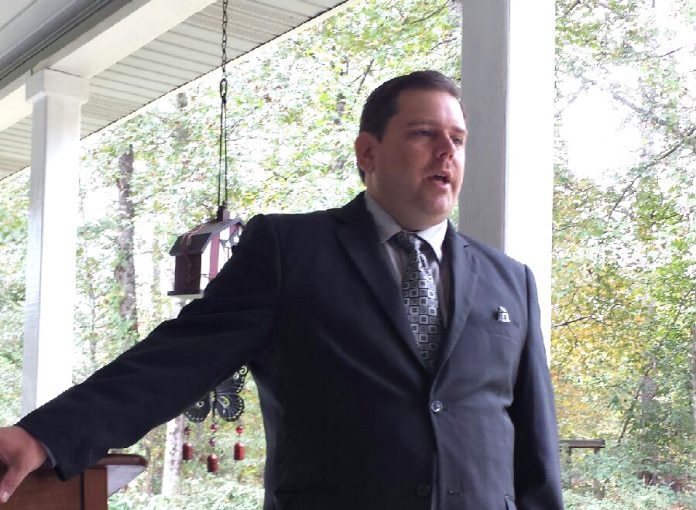 Richmond County Sheriff Richard Roundtree’s opponent in the Nov. 8 election leveled charges Saturday that the incumbent broke the law when he used uniformed deputies, who were on the clock, as part of a campaign ad.

During an afternoon press conference on his father’s property in Evans, challenger Brian McDuffie said he has filed a complaint with the state ethics commission about the violation.

McDuffie also alleged that the participation of some of the deputies was not voluntary.

“The information we have received indicates some of the deputies were ordered to attend,” he said.

Because the deputies were considered to be working, they were paid. Those who were off duty were to be given comp time at a later date.

What this means, McDuffie said, is that the taxpayers were footing the bill for the officers in Roundtree’s commercial.

Sheriff Roundtree was unavailable Saturday and could not be reach for comment.

There are those questioning the timing of the press conference just a few weeks out from the election. But McDuffie said the issue of the commercial came up earlier this fall, but he did not see the advertisement until Oct. 2.

McDuffie is president of a local non-profit, Law Enforcement Against Corruption, which investigates allegegations of malfeasance.

He said there are other concerns about the sheriff’s office and a brief is being written, which will be sent to the governor and the state attorney general.

McDuffie, who is a former employee of the RCSO,  was fired from the department in August 2013 following the investigation of an excessive force complaint. He is running as a Republican in a county dominated by Democrats.

Some local residents responded to the allegations on our Facebook page, with one labeling McDuffie’s allegations as “amateur hour mess.”

“This was not a press conference! It was a backyard rant based on bitterness,” said Biz Payne.

Said J.T. King: “He should be talking about what he’s gonna do to make the sheriff’s office better if he’s elected, not mudslinging and such.”

From Belinda Dunaway: “I commend your effort here. But I’m still trying to figure out what why you think you would do a better job. The only way I’d change my vote for Roundtree is if Scott Peebles ran again. And that is never going to happen.”

However, Diana Bennett Duva criticized the current sheriff:
“It is really rather sad. Roundtree was completely unqualified and should not have been allowed to run for office. It is a sad state of affairs when voters care nothing about right and wrong. One day it will be an absolute embarrassment for the County, but nothing will be done.”

To see a video of the press conference, visit the Facebook page of The Jail Report.  (Link here: https://www.facebook.com/thejailreport)