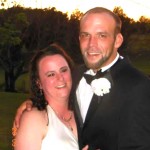 An Aiken man has been charged with fatally shooting an Edgefield couple to death and burning their house in a mysterious double murder that happened in October.

Dameion Thomas, 36, is charged with two counts of murder in the Oct. 9 deaths of 25-year-old Charles “Buddy” Deas and his wife, 25-year-old Andrea “Andie” Deas. The couple is pictured at right.

The couple were found dead in a house fire at Marigold Street in Edgefield, and autopsies revealed both died from being shot. A motive is unclear.

The Edgefield County Sheriff’s Office made the announcement Friday morning in a press release to Edgefield Daily.

Thomas is pictured here in a 2011 mugshot from Richmond County for DUI.