A Warrenville man was charged Friday with rape and kidnapping in a November incident that ended with the nude victim firing a gun at the suspect three times as he fled, authorities said.

Charles Edward Upson Jr., 24, of Olivia Way, Warrenville, was charged with criminal sexual conduct in the first degree and kidnapping. He remained in jail Monday afternoon.

The victim, a 22-year-old woman, said that Upson came by her Aiken residence Nov. 20 to visit. They were watching a movie when her head began hurting, so the suspect went into the woman’s bedroom and fell asleep. Later, she went into the bedroom and laid next to him to sleep.

The victim woke up as Upson was trying to have sex with her, according to a sheriff’s report. She told investigators that she fought with Upson, but he grabbed her wrists and assaulted her. She was able to get him off and ran to her father’s bedroom and retrieved his gun. But Upson assaulted her again when she returned and knocked the gun out of her hand.

Upson finished raping her and went to the bathroom, a report says. But she retrieved the gun and chased him out of the house, firing the gun three times toward him. A report does not indicate whether Upson was hit.

But a neighbor heard the gunfire and saw the victim standing in front of the residence and crying. The neighbor got the victim a bedsheet, wrapped it around her and took her to the hospital, where a rape kit was performed.

Upson has no criminal history in Aiken County, according to a check of online records. 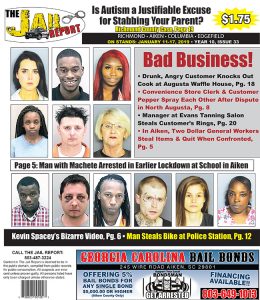