FacebookTweetPrintEmail
A meteorologist for WJBF-TV was arrested Friday for allegedly trading explicit photos with a 13-year-old girl, according to arrest warrants obtained by The Jail Report. 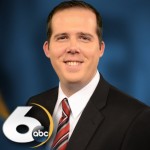 Kevin Andrew Niewood, 27, was charged with sexual exploitation of a minor and electronically furnishing obscene material to a minor. He is in the Richmond County Jail.
“We are deeply concerned by the allegations,” said Bill Stewart, General Manager of WJBF-TV. “Pending the investigation, Kevin Niewood is suspended from his duties at WJBF.”
According to warrants, Niewood got the 13-year-old girl to send him a photo or video of her breasts and vagina over the Internet. In addition, he sent her a photo of his penis.
A profile page for Niewood still active on the TV station website says that Niewood is WJBF News Channel 6’s meteorologist on their weekend Good Morning Augusta newscasts.
From the page: 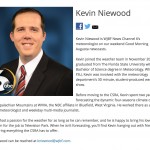 “Kevin joined the weather team in November 2014. He graduated from The Florida State University with a Bachelor of Science degree in Meteorology. While at FSU, Kevin was involved with the meteorology department’s 30 minute, student-produced weather show. Before moving to the CSRA, Kevin spent two years forecasting the dynamic four-seasons climate of the central Appalachian Mountains at WVVA, the NBC affiliate in Bluefield, West Virginia. He worked there as a weekend meteorologist and weekday multi-media journalist.”
The warrants:
Previous articleThomas Quattlebaum
Next articleWayne Curry