Augusta Dad Defends Girl with Razor Attack on Her Ex 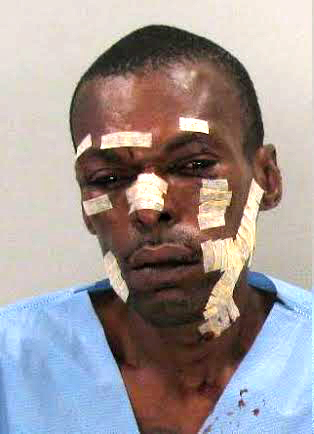 A 63-year-old Augusta man pulled a razor blade on his daughter’s abusive ex-boyfriend over the weekend and left the man with cuts all over his face.

After a scuffle, the ex-boyfriend, 48-year-old Terrance Clifford (pictured) was the one arrested for two counts of simple battery, one count of trespassing and an order to show cause warrant.

Authorities say Clifford punched the ex-girlfriend and her dad at their residence on Cedar Street. The father told deputies that Clifford came to the house at 10:45 p.m. Saturday and argued with his daughter about a missing credit card.

“He also stated that Mr. Clifford began to argue with him,” a deputy’s report says. “He advised Mr. Clifford to leave and he then became combative striking (his daughter). Mr. Clifford then began to strike him so he grabbed old razor blade and proceeded to fight with Mr. Clifford. He stated that in an attempt to protect himself, Mr. Clifford sustained lacerations to the face.”

Clifford fled the home in a blue Subaru Legacy, but deputies quickly caught up with him at GRU Hospital, where he was treated for his wounds and then arrested. He remains in jail under no bond