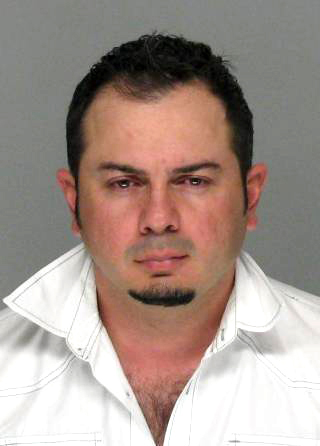 An Augusta man was arrested Sunday after killing his neighbor’s dog and being found with a chainsaw covered in dog hair and blood, according to a sheriff’s report.

Pablo Chaves, 35, of 2006 Chester Avenue,  called 911 to complain about his neighbor’s dog. When deputies arrived, Chaves admitted shooting the dog twice with a 12-guage shotgun and killing it, a report says.

What officers found next was shocking: “Deputy Davis and Deputy Gibbs also observed a red Homelite 18′ chainsaw with dog hair and blood in it lying beside the dog. Officer observed a large cut on the neck area of the black dog consistent with being cut with the chainsaw. Chaves had blood on his hands and pants legs.”

When asked about what happened, Chaves admitted killing the neighbor’s dog but said he couldn’t remember what happened after he shot the dog, the report says.

Based on the evidence, Chaves was charged with aggravated cruelty to animals, weapon possession and discharging a firearm near public highway, all felony charges. The deputies called Animal Control officials to retrieve the remains of the dog.

Chaves was booked into the Richmond County Jail under no bond.

UPDATE: The Jail Report’s Facebook page received this comment from Renee Williams Valverde, who said she was a witness:

“The dog wasn’t barking. The pitbull had already killed one of their small dogs a few years ago (police report filed). This pitbull constantly jumped their fence (they have video). They could not even let their logs out alone in their own fenced yard. The night it happened, the dog jumped the fence and killed their little dog and almost the other and his wife was out there. She came in screaming and terrified. Their two dogs are their children. The pitbull killed one and injured the other with no intent to stop. He shot the dog. They lived in fear of this happening for years. And if someone kills your child how would you respond? He tried very hard to contact the owner but they would not respond. It was a terrifying and regretful event, but when stories like this are posted, they need to put all the facts out there. And understand, this man called the officers himself. There was blood everywhere from their own little dog with horrific wounds. Please wait for all the information. It was a moment of reaction, fear and anger and love for his wife and two “children”. He is a wonderful person, so please try to get all the information first is all that his friends and family ask. Thank you.”