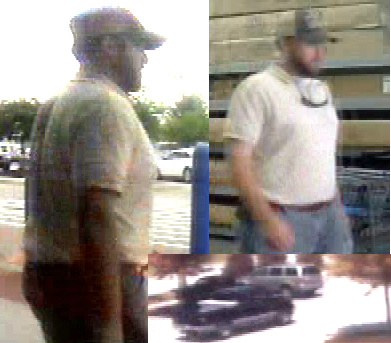 SATURDAY UPDATE: Authorities say a suspect has been identified. “No charges have been filed but the case remains open,” a spokesman said, promising to release more info on Monday.

ORIGINAL STORY:
A man approached an 8-year-old girl at the Grovetown Walmart on Thursday afternoon and touched her inappropriately, authorities said.

Columbia County authorities are asking for your help in identifying this man, who is pictured here as he allegedly followed the girl about 2:45 p.m. Thursday, authorities said.  Surveillance images also show the truck he was driving: A 2000’s model Dodge 1500 extended cab, blue with tan trim and silver tool box.

The girl told her mother that the man “spoke to her and touched her in an inappropriate manner,” according to a sheriff’s report. The mother found the man and confronted him before alerting store employees. The other did not know who the man was.