An Augusta woman was arrested for animal cruelty Monday after a deputy discovered a decomposing dog in her back yard.

The deceased American terrier was found inside a metal dog kennel behind the suspect’s house, located at 1522 Heard Avenue. There were no food bowls in the kennel and only a bucket of water that appeared to have been filled from rainwater, a sheriff’s report says.

Justina Powell, 28, claimed the dog was not her responsibility to feed. She was charged with cruelty to animals, a misdemeanor.

More details. Deputy Tiffany Justice was responding to the home around noon Monday after another person called the cops about a domestic dispute. The officer couldn’t get anyone to answer the door, but she smelled something foul coming from the back yard.

“There was a metal dog kennel in the back yard. As I approached the kennel, I found a deceased male American terrier dog,” Deputy Justice said in her report. “The dog had already begun to decompose in the kennel.”

A female terrier and three puppies were also located on the property. The puppies were located on a closed-in porch with no food or water and several weeks’ worth of feces in the room that they were walking in.

The female dog had water but was underweight. An Animal Control officer responded and removed the deceased dog and took possession of the three puppies and the female dog for safekeeping.

When Justina Powell arrived, she told the officer that the terrier was not her dog. She stated that she and her husband Christopher Powell allowed a man from an apartment complex to leave the dog at the residence.

“She stated that the male’s name was Will but she did not have a phone number or an address of the subject,” the officer’s report says. “I also advised Powell that the dog was on her property and she was responsible for caring for the dog. Powell refused to listen and stated that it was not her dog to feed.”

For more crime news, pick up the latest edition of The Jail Report, sold in local stores. And get ready for online versions of the paper, available soon at thejailreport.com. 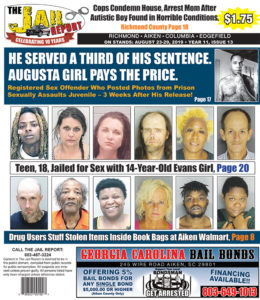