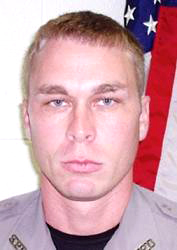 The 34-year-old man died after being shot by a Sardis police officer who discovered the burglary at 2 a.m., according to GBI authorities. That officer called for the assistance of a Burke County sheriff’s deputy, and the officers found Burke inside, armed with an ax. Burke was shot during a struggle.

Burke is the same officer who was arrested for terroristic threats & acts, accused of breaking out windows at two different Sardis homes in May 2009. The incidents allegedly occurred in the middle of the night while Burke was dressed in all-black and wearing a mask. He reportedly ran away when one of the homeowners fired a shotgun into the air. Authorities said Burke was working as an officer at the time and had made numerous attempts to serve a warrant at the homes the day prior. He had complained that the residents were being uncooperative.

A GBI investigation led to the charges, but it’s unclear the outcome.

Burke resigned from the police department after a nude photo of him surfaced, along with allegations that he sent it to underage girls. According to news reports, GBI agents confirmed he’d taken the picture at police headquarters but cleared Burke of the other allegations.