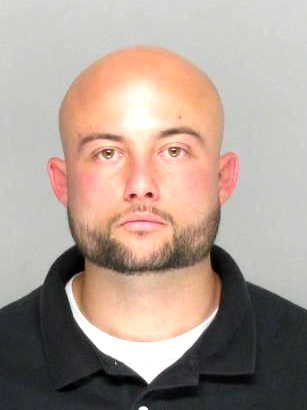 What happens when you let a serial flasher off with a few days in jail and a bunch of probation? He moves on to his next sex crime, according to Grovetown Public Safety.

Chad Stefani, 26, of Broad Oak Road, Grovetown (pictured), surrendered around 10:30 p.m. Tuesday after being named as the suspect who offered a Grovetown mother $200 an hour to spend time alone with her young daughters.  The suspect said he was thinking about having some kids, according to authorities.

Stefani was convicted in a series of 2013 flashing incidents in Richmond and Columbia counties in Georgia as well as Edgefield County in South Carolina. Only Richmond County got jail time for the crime: 44 days. (He ended up serving only 13 days from Dec. 13-Dec. 26, 2014.)

Online records show probation and community service in the other two counties.

In one case, Stefani exposed himself to two strangers in the T-Mobile parking lot on Wheeler Road in Augusta. In the Columbia County case, Stefani drove up along a woman on I-20 while they were passing the Welcome Center, raised himself up, exposed his penis and began stroking himself. The woman got Stefani’s tag number and reported it.

In Edgefield County, a Merriwether woman at the Greg’s Gas plus on Martintown Road reported Stefani exposed himself to her in April 2013 while she was in the parking lot. She called 911 and followed Stefani from the store for several miles through Merriwether before he entered I-20 and headed back into Georgia.

As part of the terms for his probation in Richmond County, a judge said he “must take a psycho sexual evaluation and treatment if directed.”