Hephzibah Mom is Jailed After Son Falls in Pool & Dies; Family is Furious Over Arrest

A 2-year-old Hephzibah boy died Monday afternoon and his mother in jail after the child fell into a friend’s pool while being unsupervised over the weekend.

Domonique Murray, 36, of Hephzibah, was at a friend’s house at 3412 Merrimac Avenue on Sunday afternoon when her 2-year-old son Justus Hyman wandered away outside, according to authorities. The child was reportedly throwing items into the pool and fell in. Authorities say no one came to get the victim until 20 minutes later.

Justus was given chest compressions after his mother found him, and he was rushed to Augusta University Medical Center, where he was in critical condition with a brain hemorrhage. His injuries were considered life threatening, and the family says he was taken of life support Monday afternoon and died, which has been confirmed.

Authorities say the child had was left unsupervised and exited out of a rear living room door, which led to the back patio and pool area. The victim walked around the pool for approximately 10 minutes and started throwing items into the pool. Justus later fell into the pool.

While Justus remained on life support, the mother was locked up in jail without bond for cruelty to children in the second-degree, a felony.

Her cousin, Vontrice Coleman, said the arrest is unfair considering it was a freak accident.

“She would never hurt her child,” Coleman said. “She was at someone else’s house and did not know the door was open. It was a freak accident that went wrong.”

Stephanie Walker, a family advocate, also complained that the mother was falsely accused and not allowed to come to the hospital.

“They refused to let the mother come out even after the doctors requested it,” Walker said.

Murray had just got married a week ago and returned from her honeymoon on Saturday. On Sunday, she was a friend’s house for a party, Coleman said.

In a widely-seen post on Facebook, Koko Richburg published photos of her nephew in the hospital bed and asked for help for an attorney.

“My niece said the woman’s pool door is broken. Im not sure I wasn’t there. From what we know baby j threw a toy into the pool while trying to get the toy he fell in. No one knew he was outside,” Koko said. “They all thought he was in the house playing. … the owner of the house went to the store to get food for a party/ gathering during this time. Some kind of way baby j got outside of her door to the pool.”

Portions of the post also compared the non-arrest of a swim instructor in Burke County after a boy drowned while taking lessons. Here is Koko’s full post: 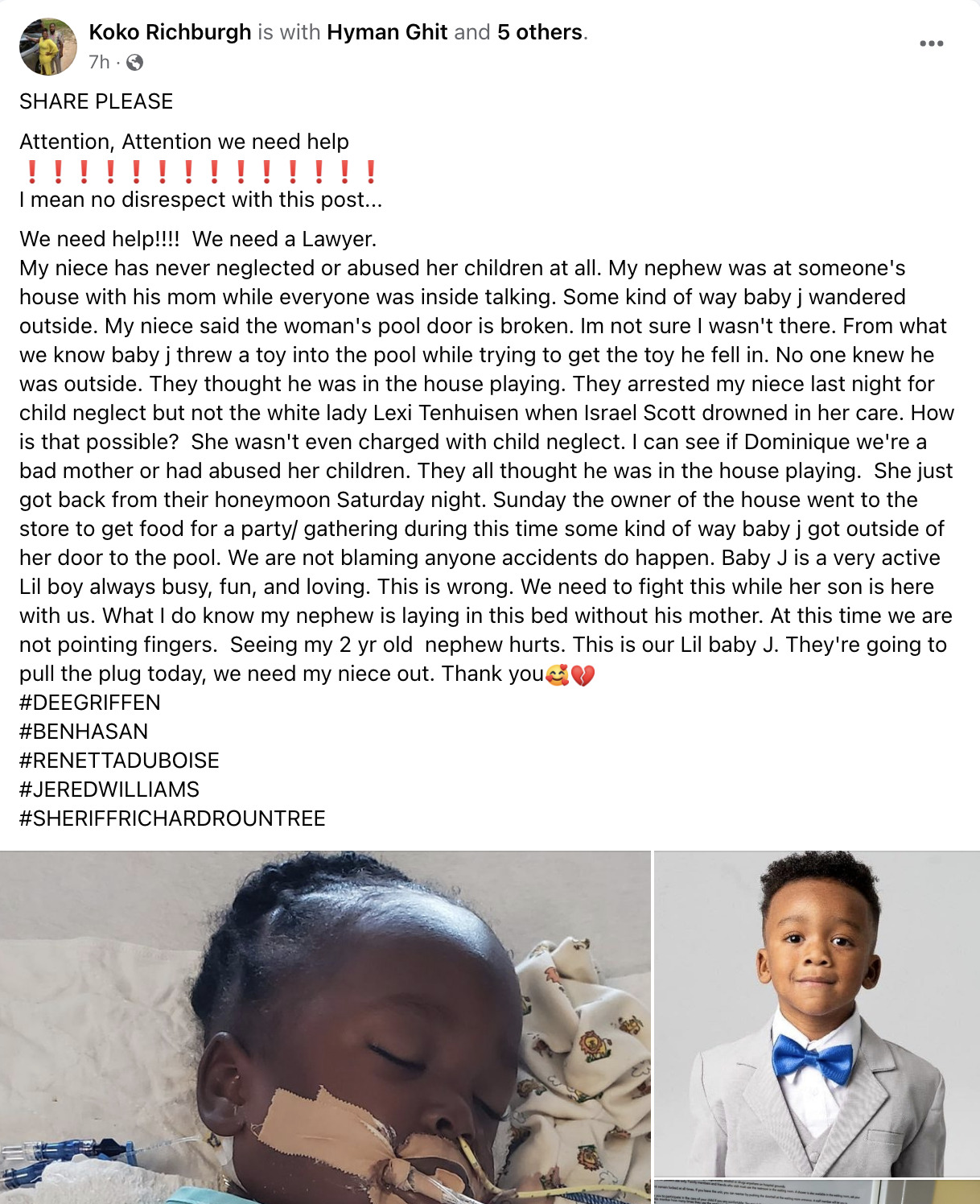