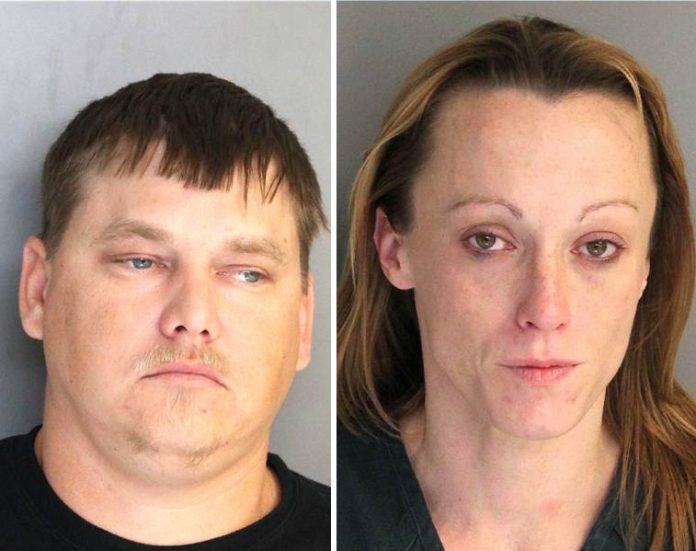 Aiken County authorities are seeking a Graniteville couple in connection with the slaying of an elderly man who was found dead in his Trenton home on Wednesday afternoon.

Donald Georgie Hurtekant, 36, of Graniteville (left), is wanted for murder and burglary, and his girlfriend Sandra Ann Marie Evans, 33, is wanted for accessory after the fact to murder. Both should be considered armed and dangerous, sheriff’s Capt. Eric Abdullah said.

The victim, whose identity was not released, was found dead on the floor of his home on the 400 block of Polks Lane in the Aiken County side of Trenton. Friends of the man have identified him as an elderly man named Claude Ward, who was charged in 2010 with attempted murder at his home (see below).

“The suspects in this case are known to the victim and we know that this is not a random act of violence. The quick actions of citizens providing information has given us an advantage in solving this senseless crime,” Sheriff Michael Hunt stated in a press release.

Aiken County investigators have discovered a motive in this case, but they said it was premature to release this information due to the nature of the investigation.

RELATED STORY: VICTIM WAS ARRESTED FOR ATTEMPTED MURDER IN 2010

Oddly enough, the victim is a former suspect in an attempted murder case from 2010. According to media reports, Ward was arrested in Augusta 2010 after deputies found a woman cut with a knife. Deputies were called to a fight on Polks Lane in Trenton and found a woman injured. Authorities say Ward had planned to pick up the woman at a Clearwater church but when she didn’t show up on time, he ended up arguing with her at his home. Ward told authorities he and the woman grabbed knives during the argument.

According to media reports, the woman was cut on her arm and shoulders during the fight and deputies reported no injuries on Ward.  He was subsequently charged, but the outcome of the case is unclear and online records show no trace of the charge, suggesting it was likely dismissed.