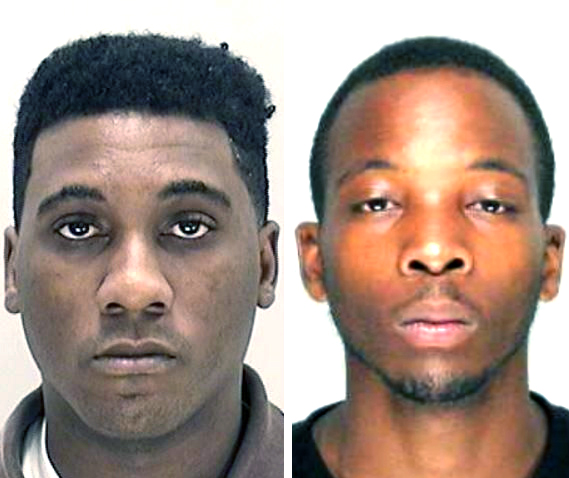 Richmond County authorities have caught one man and are searching for a second man in connection with Sunday’s violent home invasion on Holden Drive.

Kelvin Jones (left) has been arrested while Killeon Cooper (right) is being sought.

On Sunday evening, deputies responded to a home invasion on Holden Drive in Augusta. Two women, ages 72 and 49, say they heard a knock at the door and two men entered the home. The suspects then demanded money.

When a 53-year-old neighbor came to visit the women and happened upon the crime in progress, all three were bound and the robbers fled with an undetermined amount of cash and personal effects.

“Earlier (Friday) afternoon, a Wanted Poster for Killeon Cooper was distributed to the media. Cooper is wanted for Armed Robbery, Attempted Armed Robbery and a home invasion. Several people have been arrested throughout the week on various robbery charges and some media personnel have questioned if the cases were related and requested various reports. Due to the diligence and hard work of our investigators, patrol deputies and assistance from the media in putting out descriptions and various wanted posters we can now put the following together;

On April 22, 2015 Kelvin Darrell Jones, age 27 of Pearl Ave was arrested for armed robbery at the Waffle House restaurant, 3164 Deans Bridge Rd. Jones was also arrested for attempted armed robbery and possession of a firearm by a first time offender for the robbery at the Dragon Express restaurant, 2174 Gordon Hwy. Additionally, Jones was arrested for armed home invasion and possession of a firearm during the commission of a crime for the home invasion on the 1200 block of Holden Drive on 04/19/15.

Again, this shows how diligent investigations and reacting quickly to information can help put an end to a string of crimes. We would also like to thank the media for their patience this week while we followed up in these investigations.”