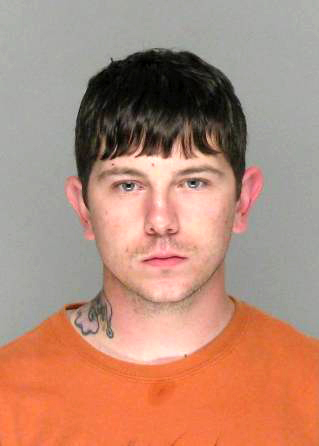 A man was arrested this week for burning down his ex-girlfriend’s Augusta home while the girl’s mother was still inside, a fire that killed two of the homeowner’s four dogs.

Justin Blake Hall, 23, was charged Tuesday with felony arson and felony burglary in the April 13th fire that destroyed his ex-girlfriend’s home at 621 Cambridge Drive and killed two pets inside, authorities say.

The homeowner, Janice Tierney, said she woke up at 3 a.m. April 13 to the sound of breaking glass and her home engulfed in fire. Someone had broken the glass window of her daughter’s bedroom window.

The woman escaped with two of her pets, but a 10-year-old dog and 8-month-old puppy were killed. Tierney’s daughter was not home.

Tierney told The Jail Report that her adult daughter was at friend’s home when the fire erupted, but she learned about the fire and rushed home.

“They broke up in October. He used to live with us. I told him he had to move out, and he has been harassing her since December,” Tierney said. “It hadn’t even entered my mind. I was shocked for a couple of days.”

The daughter had filed several police complaints against Hall. An investigation into the fire developed Hall as a suspect and he was arrested Tuesday.

“I think he just went crazy or something,” Tierney said. “Somebody had to be crazy to do something like that.”

A report says that fire officials found evidence that the arsonist used a “highly flammable accelerant” to start the fire.

Tirney says she has good insurance and will rebuild the 50-year-old home. For now, she is living with friends.

Hall remains in the Richmond County Jail under no bond.