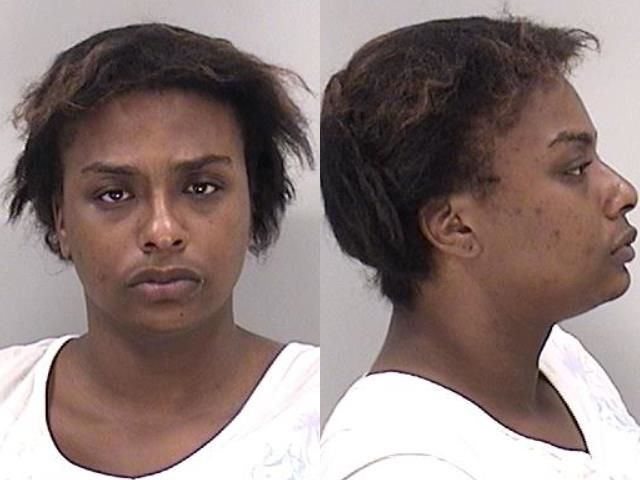 Deputies had to kick in two doors at Fox Den Apartments on Saturday to retrieve a 2-year-old girl that was being held at knifepoint by a neighbor.

Camylia Booker, 27, was arrested on multiple felonies after the bizarre incident at lunchtime Saturday at 314 Fox Trace Drive in Augusta.

(This is one of many stories in this week’s Jail Report. Cover: http://bit.ly/1HqFFFS)

The child’s mother had apparently left her daughter with other neighbors and the girl somehow ended up with Booker, according to witnesses.

Booker would not give the child back to her mother, claiming the child was being abused and she was protecting her. Authorities say that isn’t true.

Someone called police and while officers were responding, two other neighbors went to Booker’s residence to get the child. They saw that the suspect was holding several knives and Booker lunged at them when they tried to take the girl, a sheriff’s report says.

The women were allowed to leave just as police were arriving. Deputies saw the suspect with a knife in one hand while holding the hand of the child with the other.

At this point, a large crowd had gathered outside and screamed that the woman had taken the child without permission. But Booker closed the door and locked the deputies out, moving herself and the girl to a back bedroom.

So the deputies kicked in the front door and then kicked in a rear bedroom and grabbed the suspect.

The child was taken to the hospital and later turned over to a grandparent, according to witnesses.

But Booker’s actions didn’t stop. Authorities say she was uncooperative at the jail, becoming hostile and kicking at officers as they tried to put her in a restraint chair. She spit in the face of three officers, leaving officers to put a facial mask on her.

The suspect’s family told neighbors that Booker is supposed to be on medication for a mental issue.