Caught on Camera – Woman Poops on Sidewalk in Evans 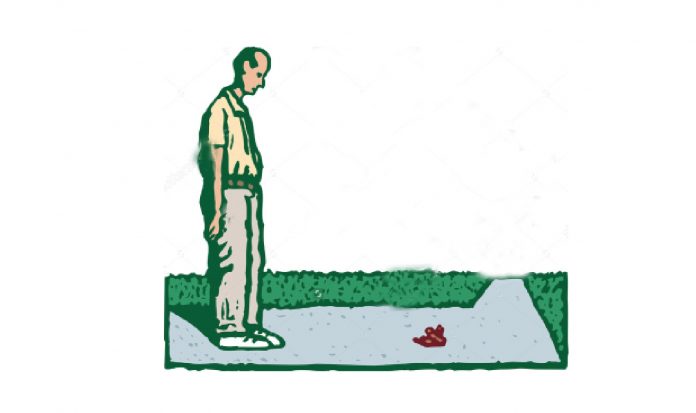 A woman who locked herself out of Evans Rehabilitation Services last week took a secret dump on the sidewalk outside the facility, according to a Columbia County sheriff’s report.

The woman had apparently left the building without her purse and locked herself out at 4 a.m. Tuesday, the report says. She began banging and kicking on the door without success. A deputy arrived and tried to make contact with a facility employee, but another patron eventually showed up and let the woman back inside. While there, the deputy and the other patron noticed human feces on the sidewalk outside the business, located at 415 Town Park Boulevard.

Later, a facility employee was reviewing surveillance footage and watched as the locked-out woman pulled down her pants and defecated on the sidewalk. The guilty woman was present when the deputy noticed the human poop.

“(She) never mentioned to them that it was her that defecated,” the deputy said in his report. “I made contact with (the woman) at her residence who stated she was so nervous she could not help herself.”

The woman was not arrested, but the facility supervisor asked deputies to order the woman to stay away from the rehabilitation service, the report says.

The narrative from the actual CCSO report:

Jason Lott stated he was reviewing CCTV footage due to a call he recieved yesterday morning from Deputy Brown. (The woman) is shown on the video trying to open the front door of the building. (She) apparently left the building without her purse and was locked out. (She) began banging and kicking on the door. (She) then left. (She) returned to the front of the building where she proceeded to pull her pants down and deficate on the sidewalk. Deputy Brown arrived on scene shortly after and attempted to make contact with Lott without success. Another patron eventually showed up and let (the woman) in. Deputy Brown, (the woman) and the other patron were then seen observing the feces on the sidewalk. (The woman) never mentioned to them it was her that defecated. I made contact with (the woman) at her residence who stated she was so nervous she could not help herself. I informed (her) she was no longer allowed to be at the property per Lott`s request. This report will be filed for future reference.

For more crazy news from the CSRA, pick up this week’s edition of The Jail Report, sold in local gas stations for $1.50