An elderly Augusta woman has died after authorities found her covered in ants that were coming out of her face, according to a sheriff’s report.

Kenneth Leverett, 58, has been arrested in the exploitation death of his mother, 78-year-old Vivian Marshall.

Authorities responded to a welfare check on Wednesday at 1433 Wrightsboro Road and found the woman in bad shape. A sheriff’s office reports the conditions:

“Gold Cross EMS and Augusta Fire Department personnel had responded to the residence at 1433 Wrightsboro Road at approximately 4:57 p.m. and found an elderly woman, Vivian Marshall, in poor conditions, on a couch covered in ants.”

At University Hospital, investigators found the victim covered in sores about her face, specifically eyelids and nose, on the back side of her arms, and generally all over her body.

“These sores appeared to be festering ant bites that were bleeding,” the report says. “ I also observed that Ms. Marshall’s fingernails were several inches long and she was generally unkept, not indicative of an elderly person receiving proper care. I was advised by medical staff that Ms. Marshall had lost 30 pounds since her last doctor’s visit.”

“He also advised me that he observed ants coming out of her facial orifices upon examination and that he suspected neglect was a major contributing factor in her condition,” a report says.

Deputies later found her son at home trying to clean up the house after realizing his mother had been taken to the hospital.

“The couch upon which Ms. Leverett had been allegedly found by EMS was disassembled and there was bug spray on the table near the couch along with cleaning supplies all around the couch, indicative that Mr. Leverett had been attempting to tamper with the crime scene by cleaning it upon our arrival,” the report says.

“On entry to the house, it smelled of urine and an unknown foul odor. All throughout the house, there was an ant infestation, particularly in the sleeping area of Ms. Marshall. Portions of the house had been recently cleaned, to include a rolled up area rug and soiled, bloody, ant-covered bedsheets placed into the washer.”

Marshall died on Thursday night. Her son is being held on charges of murder, neglect of an elderly person and tampering with evidence.

For more crime news, pick up this week’s new issue of The Jail Report. 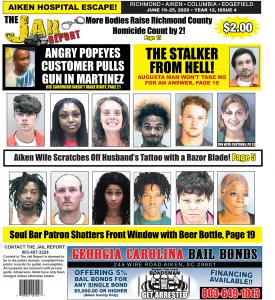