Grovetown Man is Almost Run Over by Trump Sign Thief 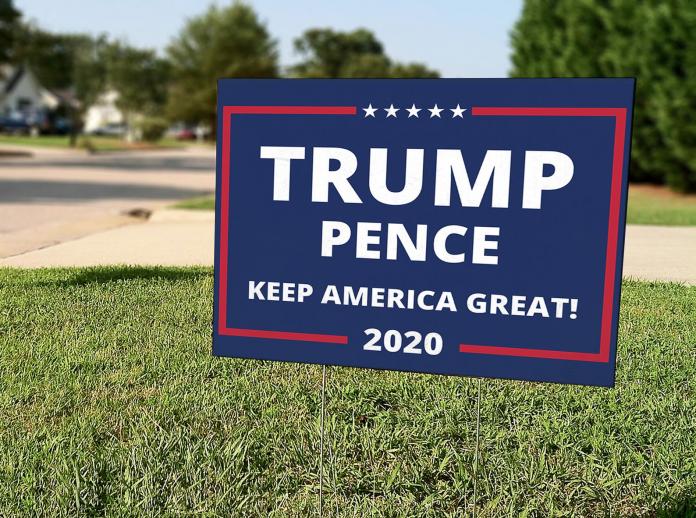 A Trump supporter in Grovetown was almost run over last week while chasing the thief who took his Trump sign.

Last Thursday, the resident of Tyler Woods Drive told authorities that a young white male stole his Trump flag from his residence the night before.

“He saw the suspect remove it from the holder and ran out of his residence after the suspect,” a report says. “The suspect jumped into a gold Ford Explorer or Jeep Cherokee and accelerated quickly away, almost striking him.”

The homeowner said he wanted to document the theft but would not prosecute the Trump hater if he was identified.

This is not the first incident in Columbia County with Trump haters. As we reported in this week’s edition of The Jail Report, a Columbia County deputy rescued a stolen Trump sign in one Martinez neighborhood.

According to a sheriff’s report, Atul Sinha witnessed the theft of a Trump political sign on a recent Sunday afternoon. While he was driving on Quail Springs Circle, the report says, Sinha saw a young girl jump from a white Jeep and take a Trump sign from the front yard of a residence.

“He said the white Jeep has been seen in the neighborhood multiple times in the past,” the report says.

The deputy located the Jeep in front of a home on Knollcrest Circle East, and the officer saw the Trump sign inside the vehicle.

“I spoke with both juveniles,” the report says, “and they gave me back the sign. I spoke with both parents of the juveniles and explained to them about the incident. I went to the victim’s residence and placed the sign by the garage.”

In August, a Grovetown woman reported the theft of her Trump 2020 sign – twice!

The 68-year-old victim told authorities over the summer that she wanted to prosecute if deputies could find out who stole the campaign signs on Huntington Drive.

The Jail Report has not seen any reports of Biden sign thefts in Columbia County.