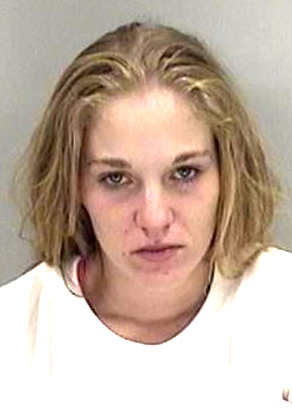 A Hephzibah mother was arrested while walking her malnourished daughter to McDonalds Thursday afternoon.

A deputy discovered the child hadn’t been fed in five days because of the mother’s meth addiction. In fact, the deputy noticed suspect Lacey Cadle was “tweaking” from meth use while walking with the girl on Kissingbower Road during school hours Thursday, according to a sheriff’s report

“(Cadle) was flicking her head from side to side and kept licking her face,” the deputy’s report says.

Cadle told the officer her daughter was not in school because she was sick and needed medical attention for a throat problem that she was having.  The mother told the officer that the girl has an ongoing problem after swallowing Muric acid two years ago.

The child was very dirty had a large cut or scrape on her chin and her teeth seemed to be mostly missing, the report says.

The deputy called for an ambulance and a paramedic discovered the little girl had a fever, a high heart rate and appeared to be malnourished. The Department of Family and Children Services was notified and the child was taken into their care to be placed somewhere safe.

Cadle, 25, of Hephzibah, was charged with deprivation of a minor.

At the home where Cadle was staying on Thomas Lane, officers found a used meth pipe on a dresser and a marijuana pipe on a nightstand in easy reach of a child.

Cadle made news three years ago in Burke County when she was arrested for drugs while driving around in a mobile meth lab. In that case, Cadle allegedly dropped Hydrocodone and Xanax pills on the ground while officers were investigating the male driver’s mobile meth lab.