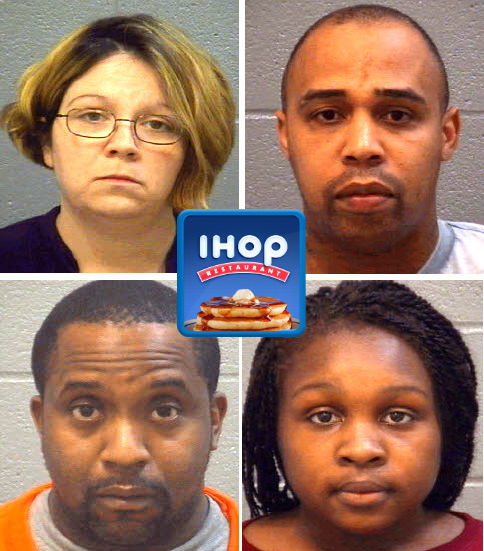 A manager and three servers at the Evans IHOP have been arrested for cooking up a scheme to get more tips without hurting customers, according to authorities.

Their arrests are one of several stories in this week’s edition of The Jail Report, in stores now. (Cover image: http://thejailreport.com/wp-content/uploads/2010/07/Cover-Issue-6371.jpg)

Investigators say the scheme went like this:
A customer paid for the meal and left whatever tip they wanted on a credit or debit card. Later, the suspects went onto the IHOP register and cancelled a specific food order from that paid check, moving that amount to the tip category. That netted them more money in the end.

The employees were apparently caught when they got greedy and started adding higher amounts. In addition, other employees got wind of the scam and that led someone to notify the sheriff’s office.

“It had been going on for a number of months, but it had escalated to the point that things were more obvious and were easier to track,” Sgt. Summers said. “And you get more workers involved and other employees became concerned and brought it to management attention.”

Investigators looked at the law and felt the computer forgery and conversion offenses were the appropriate charges.

For more local crime stories from the CSRA, pick up this week’s edition of The Jail Report.