Aiken County authorities hunted down the masked robber accused of shooting a Warrenville man in his home Sunday night. Authorities also arrested a young woman as an accomplice.

Repeat offender Deandre Campos was found in the getaway vehicle as well as Jordyn Aleece Williams.

On April 5, 2020 around 10:45 pm Aiken County Sheriff’s Deputies responded to a 911 call in the 200 block of Myrtle Street, Warrenville for a shooting incident. When Deputies arrived they found a male victim inside the home suffering from a gunshot wound to the chest.

The victim told deputies that an armed black male wearing a mask had robbed him, during the robbery a struggle occurred and the victim was shot once. The victim was transported in stable condition to an area hospital for treatment.

The suspect fled in a white SUV in an unknown direction. Deputies in the area located and stopped a vehicle matching the vehicle description. The two suspects in the vehicle were identified as Deandre Raymere Campos 27 yoa black male and Jordyn Aleece Williams 20 yoa black female.

The investigation is still on going and information will be released as it becomes available.

We ask that if anyone has any information on the case, we ask that they contact the Aiken County Sheriff’s Office at (803) 648-6811.

The Jail Report is ONLINE ONLY this week. To download your copy, go to thejailreport.com 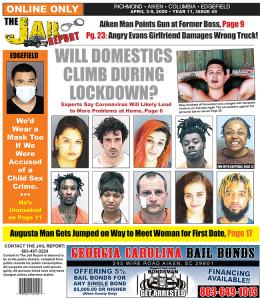