An Augusta convenience store owner and two clerks were arrested Friday after they were caught illegally paying out cash for coin-operated amusement machines over the last two months, according to a sheriff’s report.

Anil Kumar Allati, owner and operator of Exxon at 2061 Gordon Highway in Augusta, was charged with rental or keeping a gambling place, commercial gambling and a Superior Court bench warrant.

The Georgia State Lottery Association alerted Richmond County authorities that the Exxon store had high numbers of hand counts and jackpot totals on the COAM machines, which were inconsistent with other inspected stores. The store is not allowed to pay winnings from COAM machines with cash, alcohol, tobacco or firearms.

In April, the sheriff’s office sent in a confidential informant with audio and video recording devices along with $100 cash to play the machines. He played for 45 minutes and then went to the clerk, who reached under the counter and handed him $60 cash, a sheriff’s report says.

For more crime news, pick up the latest issue of The Jail Report. Here is the cover. 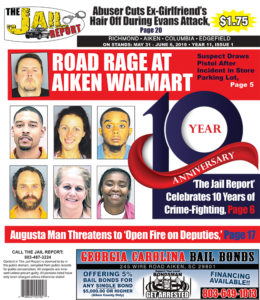