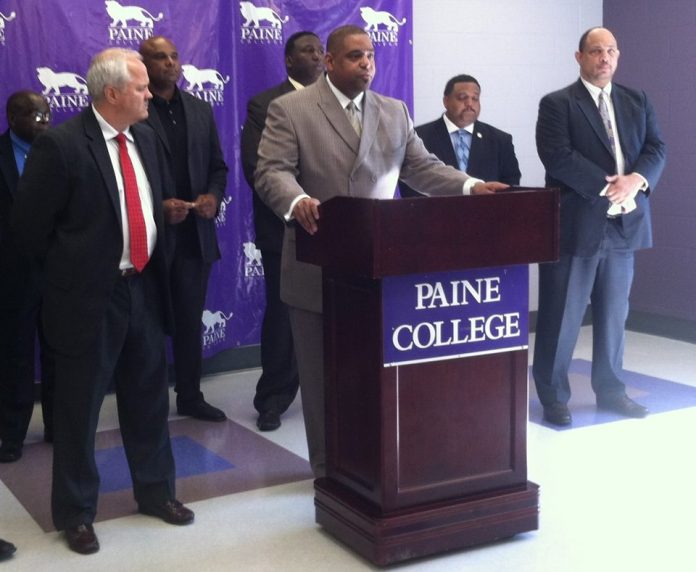 A drug deal gone wrong led to Monday’s shooting in a Paine College building – the third in two days and the second on campus believed to be related, and at least seven students have been sent home or banned from the campus because of the events.

During a morning news conference today at the school, Richmond County Sheriff Richard Roundtree said the victim, JaJuan Baker had sold drugs to the shooter Xavier Deanthony Cooper a couple of days prior.

Something about the transaction went wrong angering Cooper. Roundtree would not be specific about what happened for example if the drugs were fake or Cooper received counterfeit money in the transaction.

He said they have made recent arrests of students on counterfeit charges.

On Monday, Cooper confronted Baker in Haygood-Holsey Hall and shot him in the left side of the head. Baker is being treated at GRU and is expected to survive.

Both the victim and the suspect have criminal records. Baker was charged in 2012 with a firearms violation and Cooper has been charged with various less serious crimes including simple battery and criminal damage to property.

The weapon Cooper used in the shooting has not been recovered yet.

Roundtree stressed that the investigation is still very fluid as they try to connect the two campus shootings and the shooting earlier Monday on Laurel Street.

Roundtree said he is offering a $2,000 reward for information that leads to the successful prosecution of these cases and refused to speculate on how the crimes are connected.

Rumors have swirled around the campus that the shootings were gang related and the events were the result of a turf war.
“This is a complicated investigation,” Roundtree said.